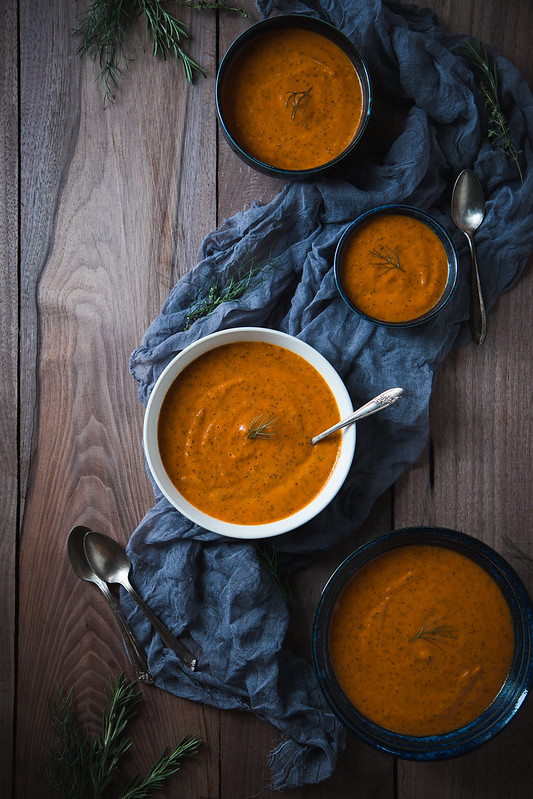 This soup has been the only thing standing between me and my post-Thanksgiving fat pants. It isn’t even officially winter yet, and I’m already chilled to the bones just thinking about the impending months of cold ahead. And when I’m cold, I eat. (You know, in preparation for the coming months of hibernation. Err, something like that). But this soup feels like a little piece of summer amidst the cold and grey, warming me up from the inside out. With a bowl of this in my hands, I feel like I can take on whatever this season has to offer (without eating myself into a slumber).

After big bursts of holiday eating, I start to crave lighter, more nourishing meals. I’m not always good at acting upon those urges though, because, well… cookies. And pie. This soup came about as a bit of an accident, when we were about to leave town for a week and I realized I had an entire crisper drawer full of red bell peppers (how does that even happen?) some fennel, and a bunch of fresh herbs that needed to be used up before we left. I threw the peppers in the oven to roast, and started tossing things into a big pot, not even knowing if I was making a sauce, or a soup, or what. (What’s this? Some rosemary? Into the pot it goes!) Then I took a taste, and realized I was standing over a pot of liquid gold. (Okay, okay… I THOUGHT I was standing over a pot of liquid gold, but I wasn’t certain until The Husband tasted it, and told me that I had to write down exactly what I had done so I could make it again. His seal of approval was all I needed to know this recipe was worth sharing with you all.) 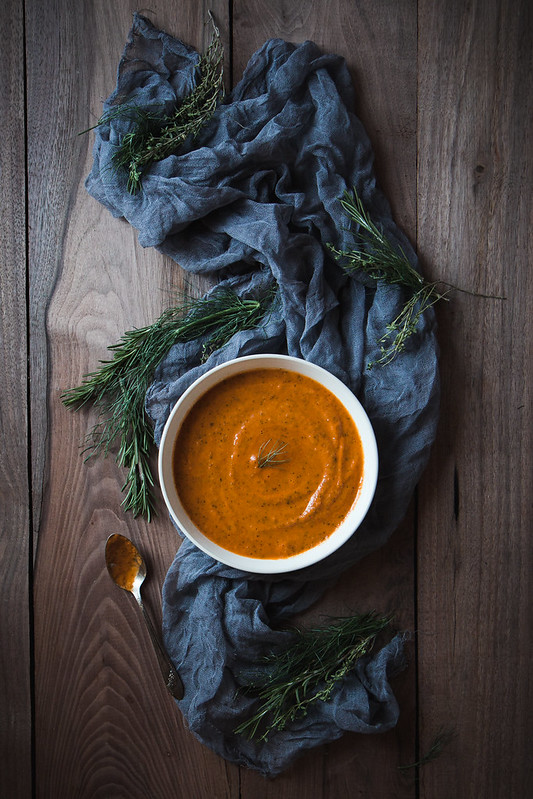 Generally speaking, I dream up a recipe (sometimes literally, they come to me in my sleep) and I think on it for days and days before carefully putting it together, measuring everything as I go so I can write the recipe later. Then there are times like these, when I’m just cooking — cooking for myself and my husband, cooking for friends, or just trying to clean out the fridge of whatever’s on hand — and so often those become my favorite recipes.

We ate our bowls of soup with sourdough grilled cheese sandwiches (completely optional, but highly recommended), and besides the crunching of bread and sipping of soup and the occasional utterance of delight, all was quiet. Normally our dinners are spent catching up on each other’s day, but this soup rendered us both silent. I take that as the sign of a very good meal, indeed. 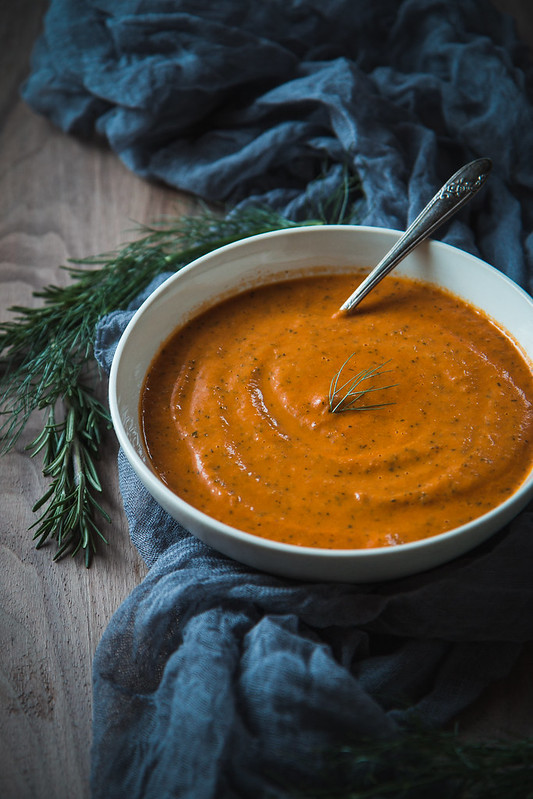 Print
Prep time
10 mins
Cook time
1 hour
Total time
1 hour 10 mins
Author: Willow at Will Cook For Friends
Serves: 4-5
Ingredients
Instructions
Notes
*The first time I made this soup, I used a hot pepper I had on hand, which I roasted along with the bell peppers. The level of heat was very mild. Just a barely-there warmth at the back of your throat as you ate, which I absolutely loved. However, I have no idea what kind of pepper it was, and when I went to replicate the recipe I couldn't find any others like it at the store, so instead I used cayenne (the beauty of cayenne is, it's easy to adjust to your own tastes, whereas using a hot pepper you never know exactly how spicy it will be). I find about ⅛th of a tsp. to be just right for me, but start with just a pinch and adjust as you see fit.

To make the peppers easier to peel, place them in a bowl right when they come out of the oven and cover tightly with plastic wrap or foil. Let sit for 15-20 minutes, or until cool enough to handle, and the steam will help loosen the skins. Sometimes I find it helpful to place the peppers skin-side up on a cutting board, and use the side of a spoon to gently rub the skin off. Try to remove as much of the skins as you easily can, but don't fuss over it too much. It doesn't have to be perfect.
3.5.3208 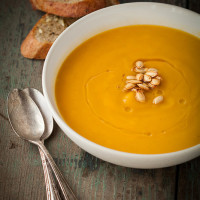 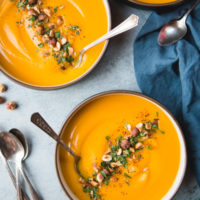 I've always envied creative types who say their most productive time is in the morning. That they wake up inspired, motivated,...