By Willow Arlen on October 24, 2012 28
“It’s bigger than love. Brighter than all the stars combined. Dwarfing the sun, burning within my heart and mind.” – Ben Gibbard, “Bigger than Love”, (based on letters between F. Scott Fitzgerald and his wife Zelda)

Do you ever have those moments when you’re thinking about something, trying to get your head together, and a song comes on the radio that just clicks? Like the most impeccably timed lyrics imaginable, and one chorus later everything makes sense?

And sure, maybe thirty seconds into the song it turns out to be about something entirely different, and yes, maybe you’re just imposing whatever message you were hoping to hear over the singer’s words, and okay, perhaps it’s a little crazy to think the answers to one’s problems could be summed up in one catchy verse…

But sometimes, whether I’m making it up or not, that perfect song at that perfect time can get me past whatever mental block I’m having. Like drain-o for my brain-o. Then, of course, the tune gets stuck in my head and I’m still replaying it days later… what was that about unclogging my head?

Is there a song that speaks to you right now, or that you just can’t stop humming in the back of your head? Do tell!

This Pumpkin Gingerbread cake is based off a recipe from The English Kitchen – Marie calls it “The World’s Best Gingerbread Cake”, and so far I’ve found no evidence to the contrary.

One could reason, then, that this is The World’s Best Pumpkin Gingerbread Cake… but I can’t say I’ve eaten enough of them to have any proof of that. I can say, however, that it blew all my expectations out of the water. Unlike some other recipes I’ve tried, this one doesn’t skimp on the spices. It is most definitely a ginger-bread cake. Then the pumpkin comes along and mellows the spice just slightly, making for the perfect balance of flavors. On its own, the cake is incredibly moist and not overly sweet… with the toffee sauce, it is a force of will not to devour whole. 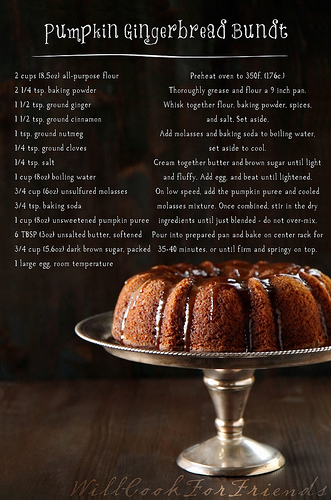 Method
1.   Preheat oven to 350f. (176c.) — grease and flour a 9-10 inch bundt pan.
2.   Whisk together the flour, baking powder, spices, and salt. Set aside.
3.   Add the molasses and baking soda to the boiling water, stir to combine, then set aside to cool.
4.   In a large bowl, cream together the butter and brown sugar until light and fluffy. Add the egg, and beat until fluffy and lightened in color.
5.   On low speed, add the pumpkin puree and the cooled molasses mixture. Once combined, stir in the dry ingredients until just blended — do not over-mix.
6.   Pour batter into your prepared pan and bake on the center rack for 35-40 minutes, or until the top of the cake is firm and springy to the touch and a tooth pic inserted in the center comes out clean.

Toffee Sauce
1.   In a heavy sauce-pan, combine butter, cream, and brown sugar over medium-high heat. Stir continuously until the sauce reaches a boil, then reduce the heat to medium-low. Continue stirring for another 8-10 minutes, or until the sauce has thickened.
2.   To test if the sauce is thick enough, spoon a small amount onto a cool plate and tip the dish to the side – this will give you an idea of how thick the sauce will be once it has cooled.
3.   Once the sauce is thickened to your liking, remove from heat and stir in any liquor or flavorings, if using.

When ready to serve, pour the toffee sauce over the cake. Any extra toffee sauce can be stored in an airtight container in the fridge for up to the expiration date of the cream — left-overs will firm up when chilled, and can be eaten as a dip with apple slices, or re-warmed and spooned over ice cream.

Pumpkin Ravioli with Hazelnut Brown Butter Sauce - recipe in post “I myself am made entirely of flaws, stitched together...