By Willow Arlen on October 29, 2012 24
Boys and girls of every age, would you like to see something strange?
Come with us and you will see… this our town of Halloween.
This is Halloween, this is Halloween – Halloween! Halloween!

Darkness falls across the blogosphere – the days get short and nights grow long, and from the depths of the shadows Vampire Teeth flash, Zombies groan, and all manor of Devilish things appear… devilishly tasty things, that is!

Hallow’s Eve is just around the corner, and all around I’m seeing spooky treats and recipes. From the classics like Worms in Dirt and Witches Fingers, to Ghostly Marshmallows, Tombstone Cookies, Franken-Crispy Treats, Bloody Mary’s, and Spider Bites… the list goes on and on!

With only a few days before The Witching Hour, it’s easy to get overwhelmed by all the goodies (or should I say baddies?) waiting just a click away.

For my own eerie eats, though, I wasn’t interested in your average zombies and ghouls… I had something else in mind. Of all the frightful candidates, no creepy character is so close to my heart as Jack Skellington, The Pumpkin King.

“With the slightest little effort of my ghost-like charms, I have seen grown men give out a shriek – with a wave of my hand and a well-placed moan, I have swept the very bravest off their feet!” – Jack Skellington

For those who aren’t familiar, Jack Skellington is the flawed yet lovable protagonist of Tim Burton’s animated musical “The Nightmare Before Christmas”. You see, Jack is the king of Halloween Town, where it’s everyone’s job to create spooks for the folks in our world. Jack is not content with scaring the living daylight out of people, though – he feels there’s got to be something more – and that’s when he discovers Christmas Town. The rest is the story of The Pumpkin King’s well-meaninged attempt at playing the roll of Sandy Claws (Santa Claus), and all the things he discovers along the way.

I grew up watching The Nightmare Before Christmas every Halloween, and often every Christmas. As a kid, it was not only entertaining, but gripping and meaningful… not to mention, some of Danny Elfmen’s best work. But maybe that’s just me. Making these cupcakes I discovered The Fiancé has never seen my old childhood favorite, so we’ll be watching it for sure this 31st!

My other inspiration for these cupcakes was the realization that such a candy-filled holiday would be rather rough for someone with dietary restrictions… so I wanted to be sure anyone could enjoy these sweet treats! I started with the decision to make them vegan, then went all-out and made them gluten-free and nut-free, too.

I’ve dabbled in gluten-free baking before, but have to admit I wasn’t sure how well these would turn out. Then I unwrapped one, and bit into the rich, chocolaty, moist cake… somebody pinch me! These easily hold their ground against any ‘regular’ chocolate cake – in a blind taste test, I honestly don’t think I’d be able to tell the difference. They were shining examples of perfect cupcakes, simple as that.

I did, however, make one major mistake. Since Jack Skelington was ‘The Pumpkin King’, I had the brilliant idea of creating a pumpkin ‘cheesecake’ swirl throughout these cupcakes. Let me just say, vegan “cream cheese”… never again! It sounded good, looked good, baked perfectly, and tasted like something I could’ve pulled out of last week’s trash. Have any of you had good luck with vegan cream cheese substitutes? If so, please let me know in the comments.

So I present to you these incredibly moist, tender, and delicious Chocolate Cupcakes – sans the pumpkin swirl. I have a feeling I’ll be making these again and again, no matter the occasion!

Recipe Note: I’ve tried a few different gluten-free flour blends, as well as having made my own. I highly recommend putting making your own, for better control over your baking. Click here for my recipe for gluten-free flour mix. Keep in mind that the amount of liquid you need in this recipe may vary slightly depending on the type of flours in your mix – I suggest starting with a little less almond/rice milk than is called for below, and increasing the amount as needed. The consistency of the batter should be like thick, smooth brownie batter.

Method
Preheat oven to 350f., and line one cupcake pan.

Whisk together the flour, sugar, cocoa powder, baking soda, and salt. Set aside.
In another bowl, combine all of the wet ingredients and stir in the ground flax.
Mix the wet into the dry, stirring until the batter is smooth – because these cupcakes are gluten-free, you don’t have to worry about over-mixing the batter.
Scoop into the lined cupcake pan, filling each liner almost all the way to the top. Tap the pan firmly against the counter 2-3 times to knock out any air-bubbles, and bake on the center rack for 22-26 minutes, or until just firm on top.
Remove from oven, and let cool 3-5 minutes before removing from the pan, and allowing to cool the rest of the way.

Frosting
While the cupcakes cool, cream together the margarine and 1 TBSP of almond or rice milk. At low speed, ad the powdered sugar 1/2 cup at a time. Adjust the consistency of the frosting by adding more milk, or more powdered sugar. Mix in the vanilla, or other flavoring.
For my cupcakes, I separated my frosting into two bowls and colored one orange using gel food coloring.

For decorating, melt 4oz. vegan chocolate in a microwave safe bowl. To make my chocolate darker, I added a small amount of black gel food coloring (be sure to use gel, or paste, coloring – not regular liquid food coloring, as it may cause the chocolate to seize up). I then poured the  melted chocolate into a piping bag (or you could use a zip-top bag with a small corner snipped off) and piped my designs onto the cupcakes. Get creative and make your cupcakes your own! 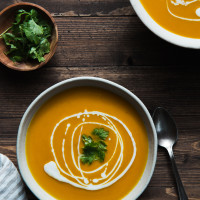 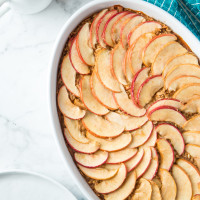 Pumpkin Gingerbread Cake with Toffee Sauce - recipe in post"It's bigger than love. Brighter than all the stars combined. Dwarfing...