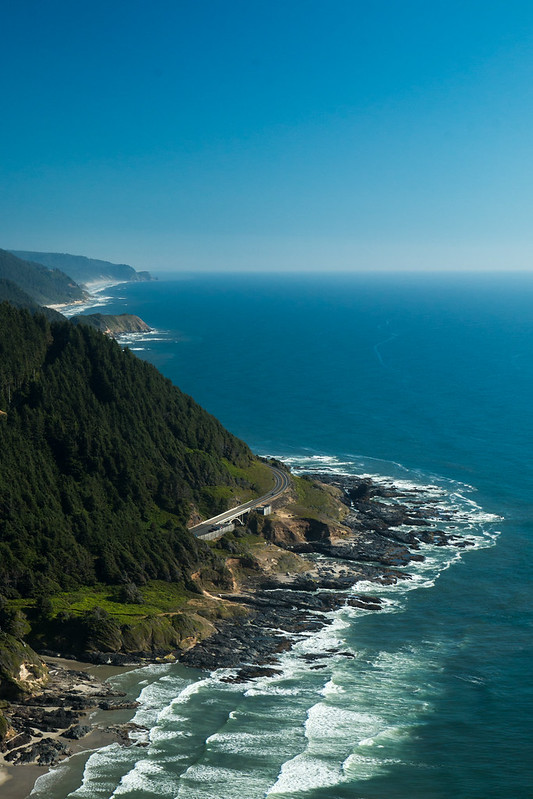 If old growth forests, sunsets, and waves crashing against rocks aren’t your thing, look away now.

I never thought I’d be someone who was able to take two vacations in one year, but here I am, going back to one of the most beautiful places on earth for the second time in just a few short months. The Husband and I are lucky enough to have family willing to share their home with us in this glorious place, and words can’t even begin to express how grateful I am for their generosity. (Thank you, Drew and Robert!) 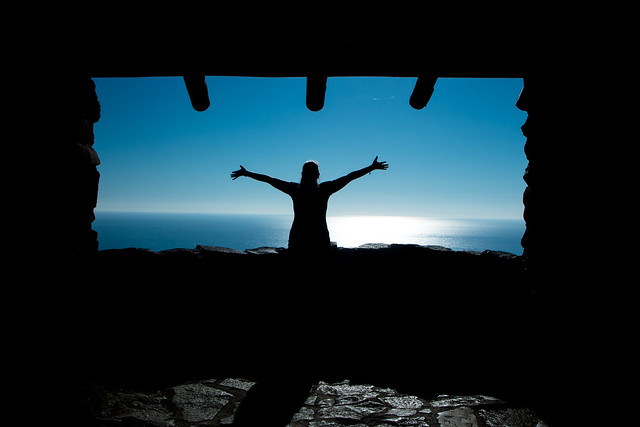 We ate like kings and queens while we were there (this midwest girl could get used to fresh caught seafood everyday), hiked the forests, spent hours on end walking the beaches, and of course, took millions of photos. Not exaggerating, I filled three memory cards and spent more time sorting through them than I did taking them! These are just a handful of those shots, because I can’t help but share. It’s good to point my lens in a direction other than food sometimes!

If you want to get a closer look, you can click on any image to go to my flickr account, where you can view the photos full screen. 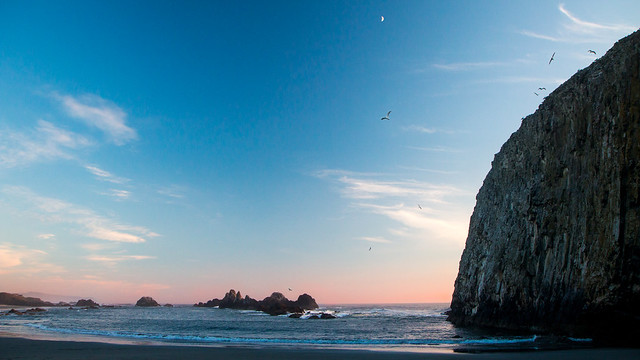 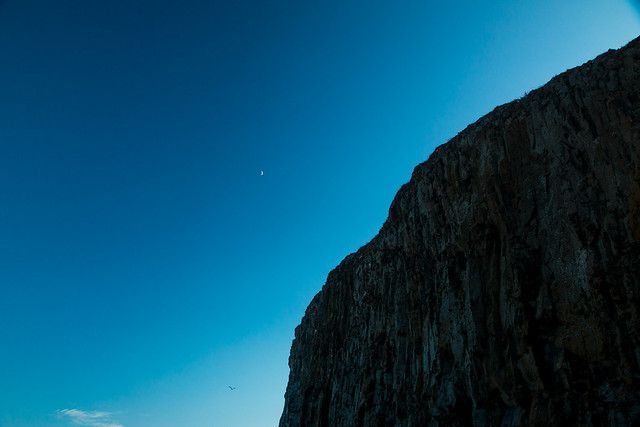 Above: Seal Rock, just before sunset. Below: The Husband walking the beach, taken from the top of an overlook. I’m convinced it just isn’t possible to capture the grandeur of the ocean in a photograph, but that didn’t stop me from trying. 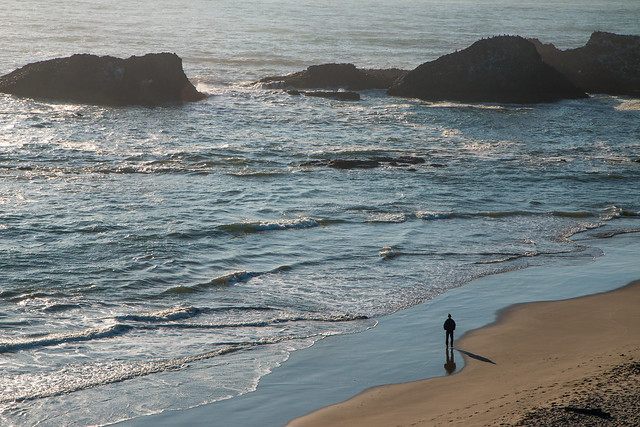 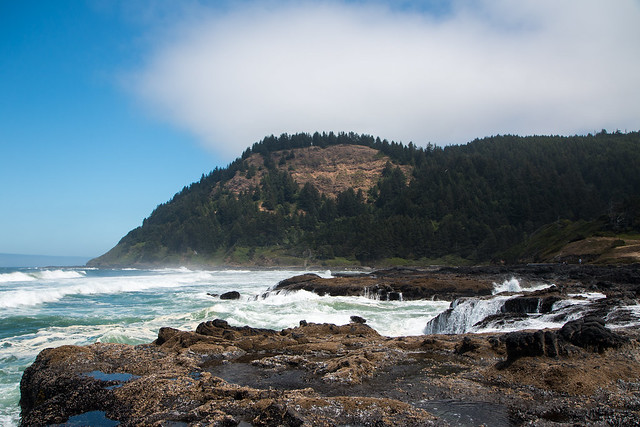 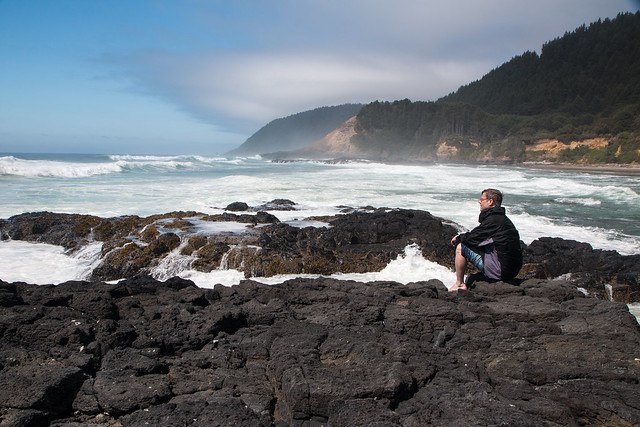 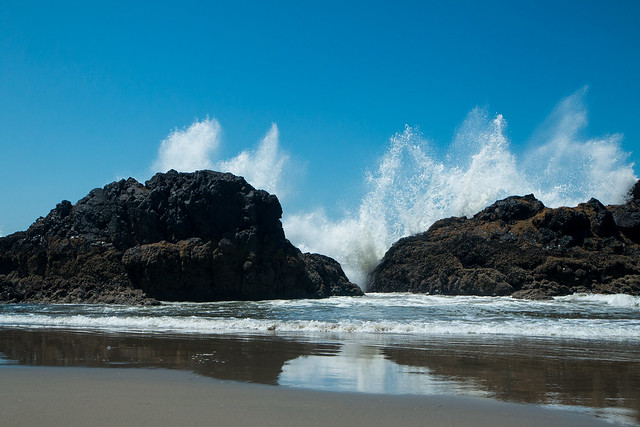 Watching the tide come in and crash against rocks might not be everyone’s cup of tea, but The Husband and I could do it for hours and never get bored. We estimated some would crash upwards of ten or fifteen feet in the air, and even at a safe distance we’d get showered with spray. 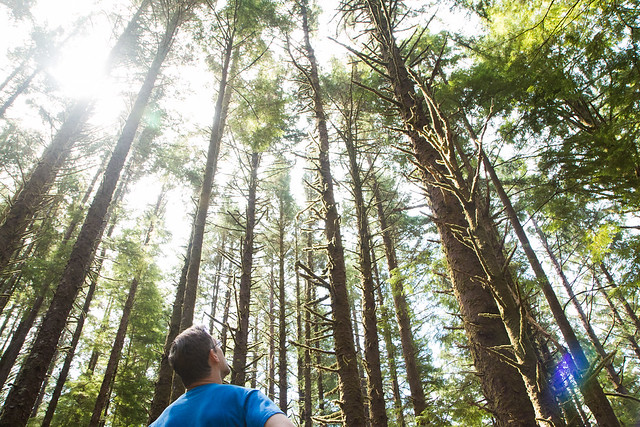 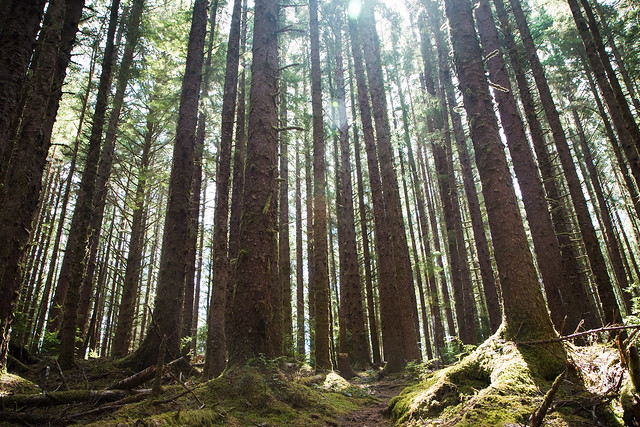 On the other side of the highway from the ocean are old growth forests, which are also nearly impossible to capture on camera. Just trust me when I say, these trees were really, really tall! 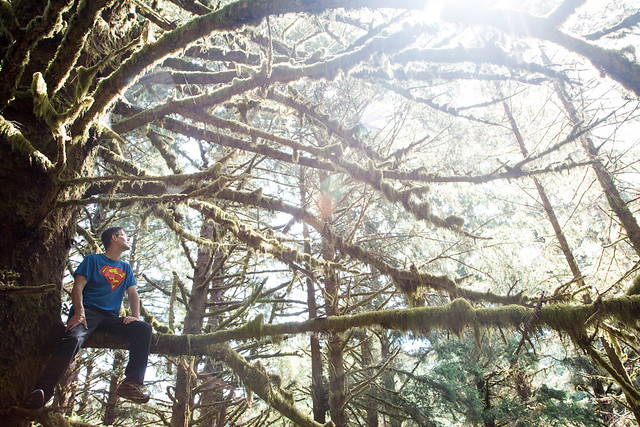 That time I found superman in a tree. (P.S., I was chased by hornets shortly after snapping this shot, and superman did not come down from his tree to help me. I can’t say I blame him… those things are MEAN!) 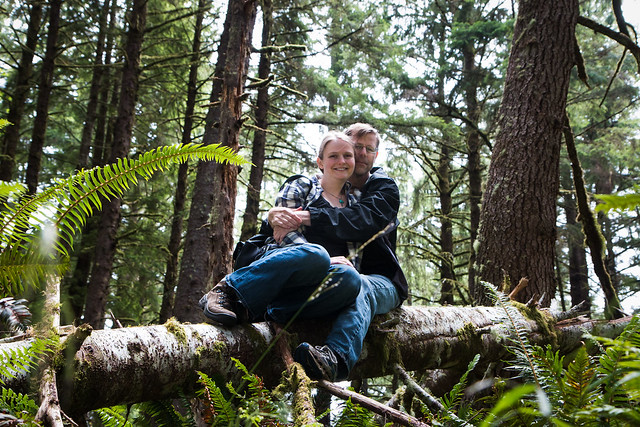 The Husband and I, photo courtesy of our friend Eva. 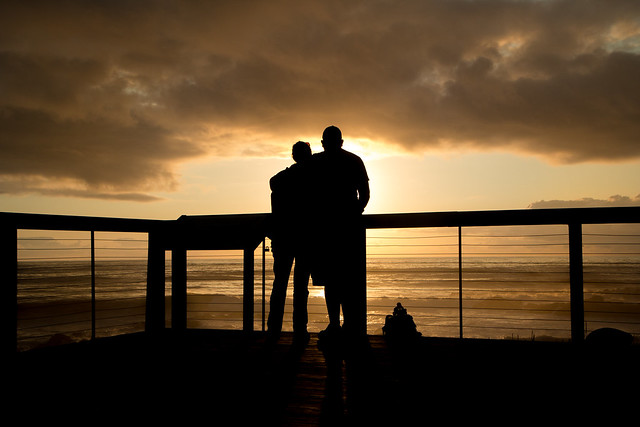 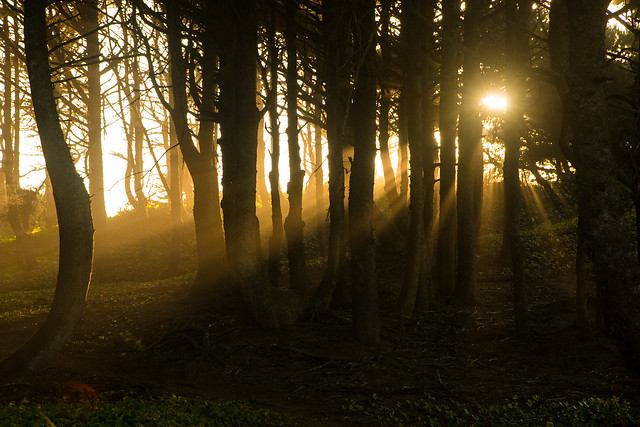 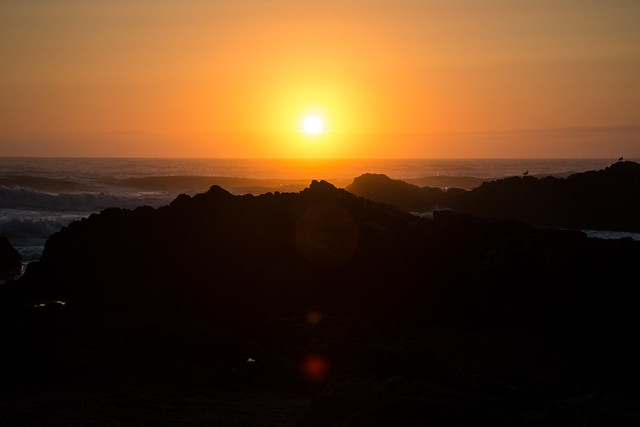 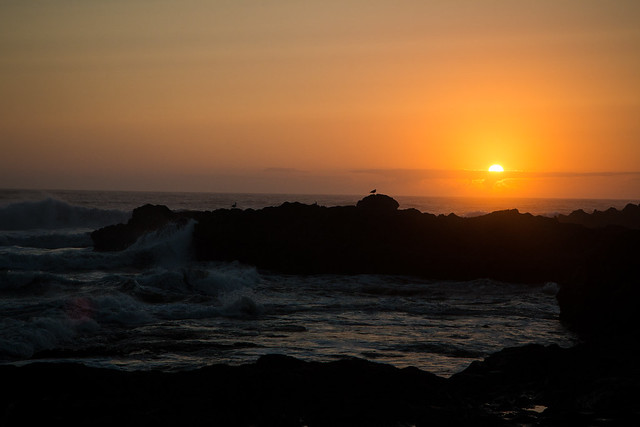 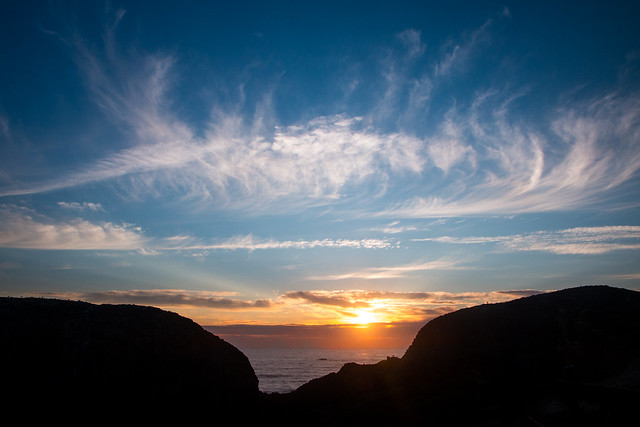 All of the sunsets! I know it’s cliche, but I just can’t help but photograph them. The coast is notorious for cloudy days and rain, but we were blessed with some of the clearest, most beautiful skies. 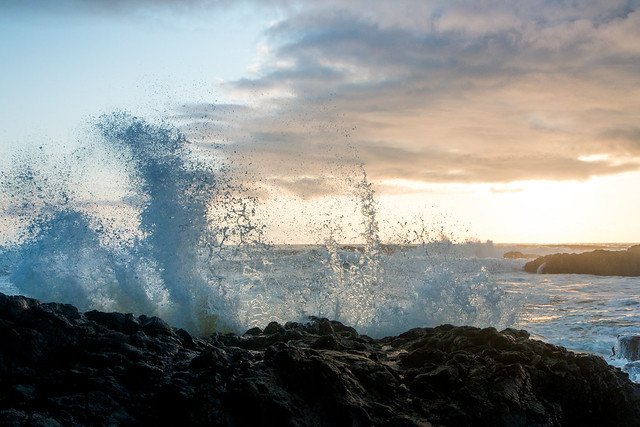 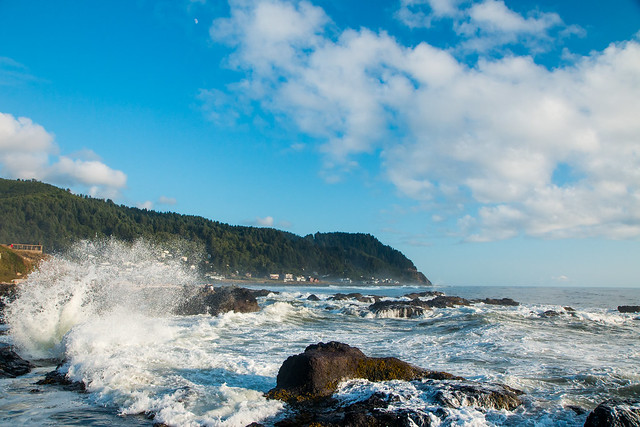 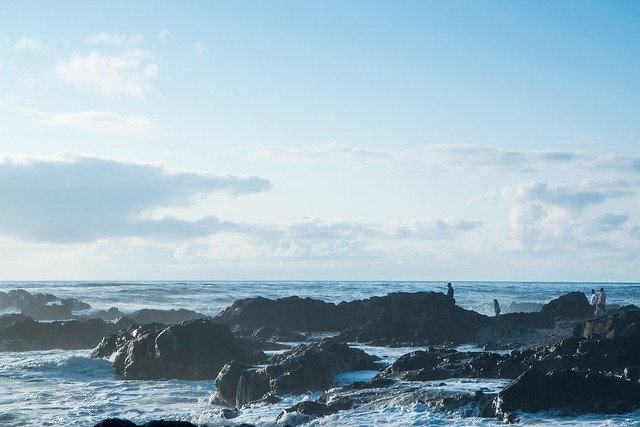 These last few photos were taken on the last day of our trip, within walking distance of the house where we stayed. I always feel a little sad going home from a trip like this, but looking back at the pictures never fails to remind me how lucky I was to go in the first place.

One last photo, because I can’t resist… 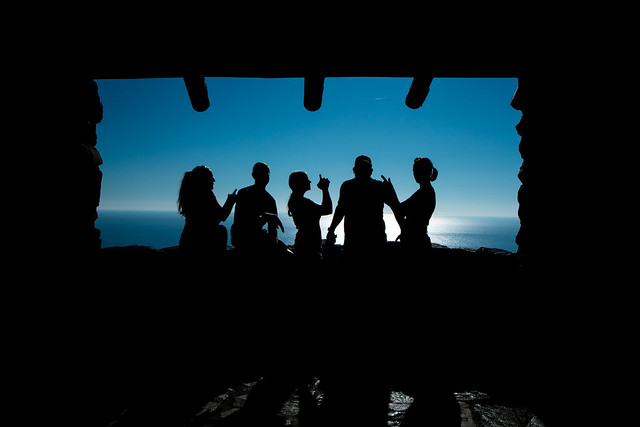 Those silhouettes are of The Husband and I (middle left) and our friends Altruh, Eva, and Jeff. We were going for Charlie’s Angels, but for some reason the guys weren’t as keen on striking a pose — still, it’s one of my favorite shots from the entire trip. (This shot, as well as the first two photos of this post, were taken looking out from a stone overlook built just before WWII to watch for ships. The view from there is one of my favorites along the whole coast!)

If you’ve made it this far and can’t get enough, you can find photos from my previous trip to the coast, here.

There's been a common theme in my house recently, of meals that require no heat to make. No roasting, sauteing,...