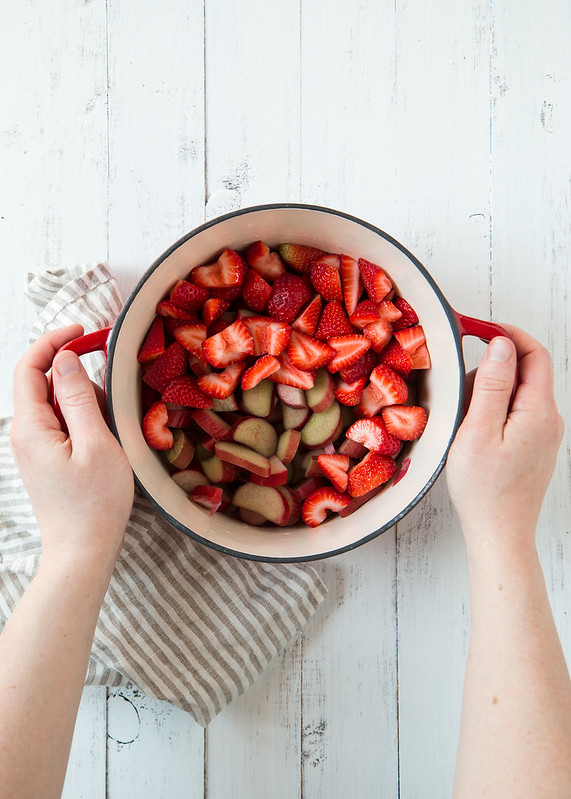 I’ve had a bit of a lull in the kitchen, lately. Every once and a while I fall into one of these slumps where the motivation to cook just isn’t there, and I can’t quite figure out why. It’s frustrating, especially in the Spring when fresh produce is just beginning to show up, and a voice in my head keeps telling me this is when I should be the most inspired. But I’m just… not.

Without fail, however, the thing that brings me back from one of these ruts is the very thing that brought me into the kitchen in the first place: cooking for others. Sharing food with people never fails to get me excited, and it was that excitement that led me to making this strawberry rhubarb jam.

I had been circling the produce section for weeks waiting for rhubarb to hit the stands — a sure sign of Spring in Michigan — but when it did, I still wasn’t sure what I wanted to do with it. I had plenty of ideas, but none of them really called out to me. It wasn’t until I realized Mother’s Day was just around the corner that I found the inspiration I needed. The instant I started thinking about making something to give to the moms in my life, everything fell into place. 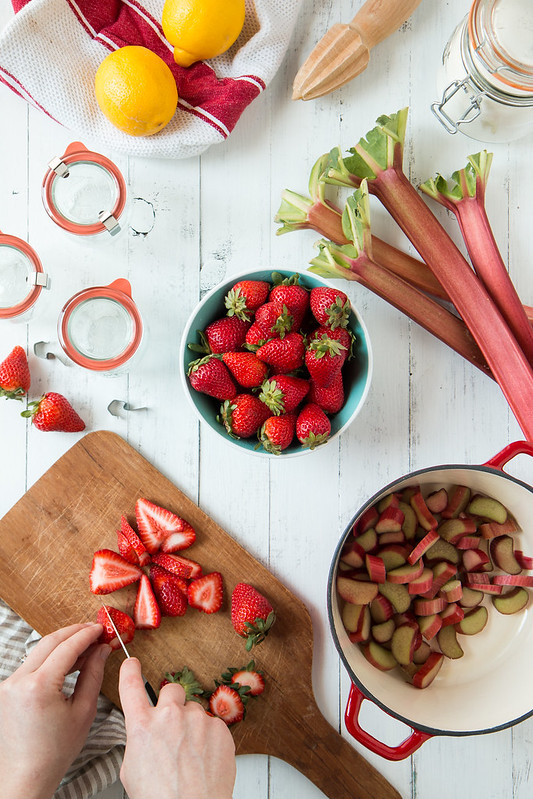 Cooking doesn’t get much easier than jam. In fact, that should be a saying: easy as jam. Sure, if you’re planning on making a huge batch and canning it all it can take some time, but at it’s heart, all jam requires is fruit, sugar, and a few minutes on high.

As I stood over the stove watching the fruit break down and release its juices, I asked The Husband if he had ever made jam. “No,” he said, “jam isn’t really on my culinary radar.” Then he added, “but every time I’ve had homemade jam, I’ve been really impressed!”

That’s the thing — most people don’t even think about making jam from scratch anymore. It’s one of those things that seems so old fashioned, like something only grandparents do. But when you actually take the time to make a batch, it’s hard to think how something so easy and rewarding could ever fall out of fashion. Imagine taking the brightest, best flavors of the season and preserving them in a way you could enjoy even months later. Now imagine spreading that flavor onto fresh, warm, buttery biscuits. Need I say more? 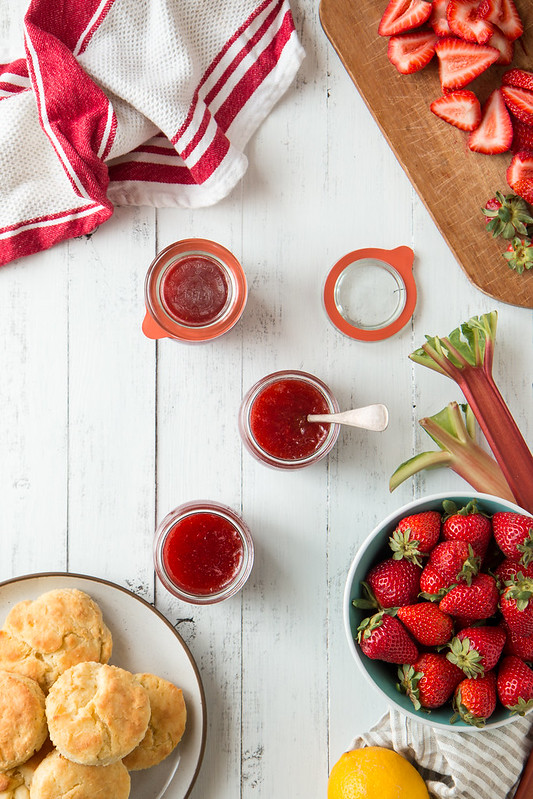 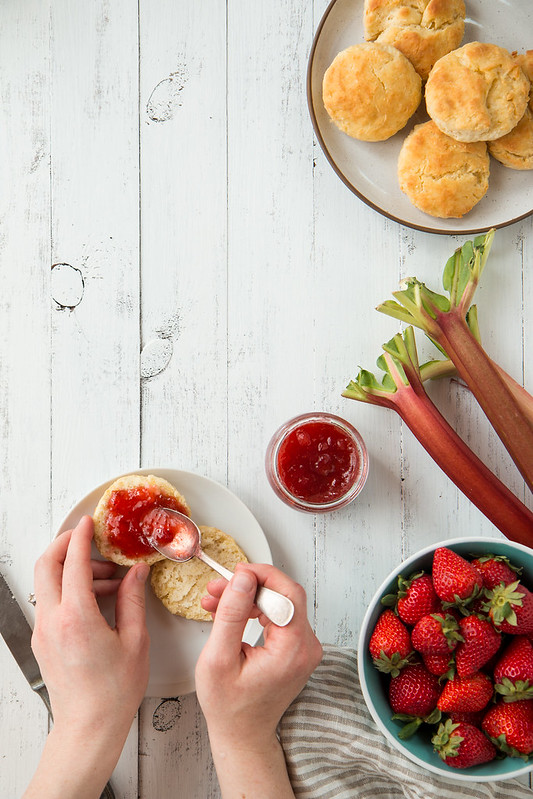 Besides capturing the season at its peak, jam also happens to be the perfect food for gifting. You know that feeling you get when someone sends you a handwritten letter in the mail? How special it feels to know they were thinking of you? That’s how I feel about jam. It may be a little old-fashioned, but it feels so good when someone thinks of you enough to share a jar.

(And just remember… whether you make a batch this weekend for Mother’s Day, or make it for someone else in your life, there is no shame in keeping a jar for yourself. Just another reason it makes the perfect gift.) 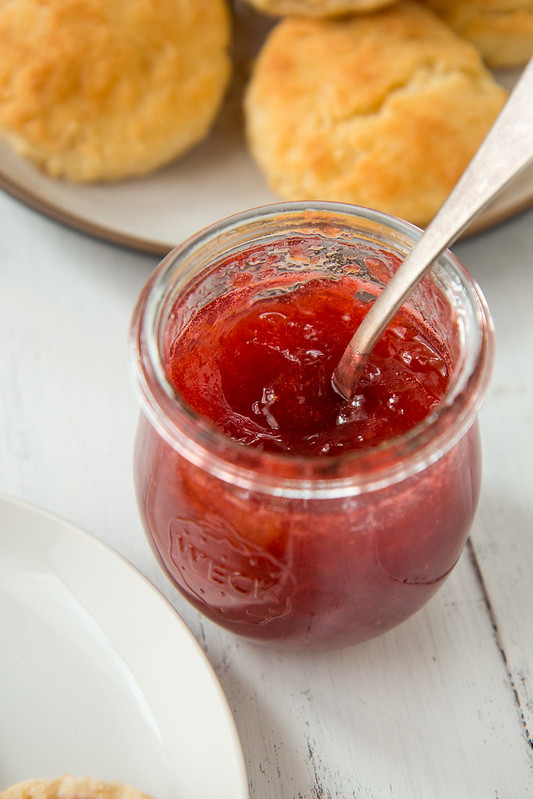 Print
Author: Willow at Will Cook For Friends
Serves: makes four 8oz. jars
Ingredients
Instructions
Notes
*I find Three cups of sugar to be the perfect amount, and makes a sweet, but still very brightly flavored jam. However, it is on the low side as far as jams go (many jams use more sugar than fruit). If you prefer your jam to be even sweeter, feel free to add more sugar according to your tastes. If you're not sure, start with three cups, then taste the jam when you let it cool on the saucer. If it isn't sweet enough, add more sugar to the pot, and let it dissolve completely before testing again.

**The amount of pectin used in this recipe creates a jam that sets up slightly, but isn't as firm as store bought jams. If you prefer a firmer jam, you can increase the pectin by another TBSP. If you prefer a looser jam, or want to avoid using pectin, you can omit it all together and cook the jam longer until it reduces and thickens slightly. (The reason I use pectin is it reduces the cooking time (my jam started to set after about 5 minutes of boiling), whereas a jam made without pectin will need boil significantly longer. Cooking the jam longer will reduce the overall yield, and can dull the flavor. If you don't have any pectin, you can try quartering a green apple and adding it to the jam at the beginning of cooking. This will impart some natural pectin, and you can remove it before spooning the jam into jars.)
3.2.2929 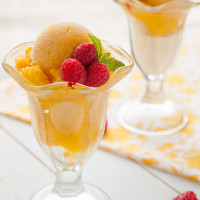 Nut milks have been taking home kitchens by storm lately, and it isn't hard to figure out why. If non-dairy milks...