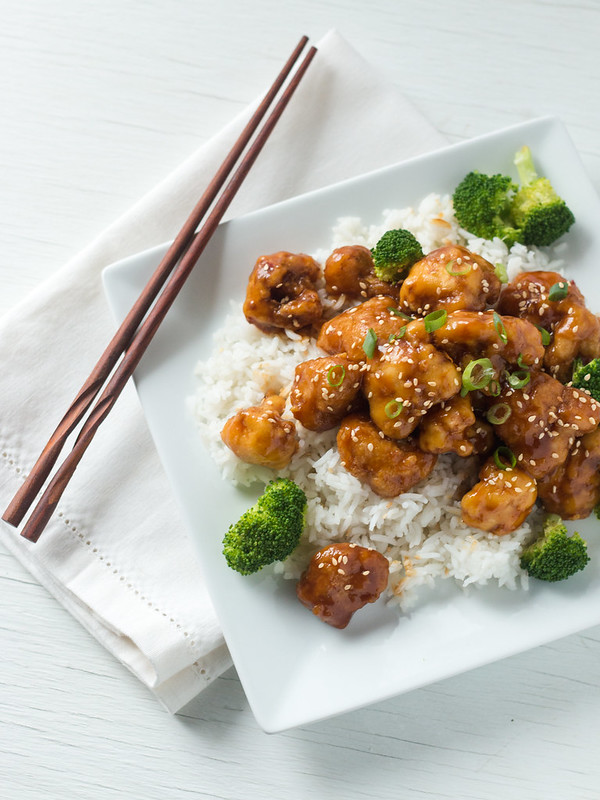 If I had to venture a guess, I’d say General Tso’s Chicken is probably one of the best-known Chinese dishes here in America. Which is kind of funny, seeing as it’s such a far cry from traditional Chinese food.

Indeed, it has nothing to do with with it’s namesake, the military leader General Tso of the Qing Dynesty, nor did it even originate in Hunan, China, of which it is supposedly the cuisine.  Instead, it was created in the early 70’s, when Chinese chefs here in the U.S. needed a dish that would appeal to the American palate.

Well… they succeeded. Whatever it’s origins, there’s no question about it: it’s downright delicious. Sweet, spicy, rich sauce smothering crispy fried nuggets of chicken… how could anyone not love this stuff? 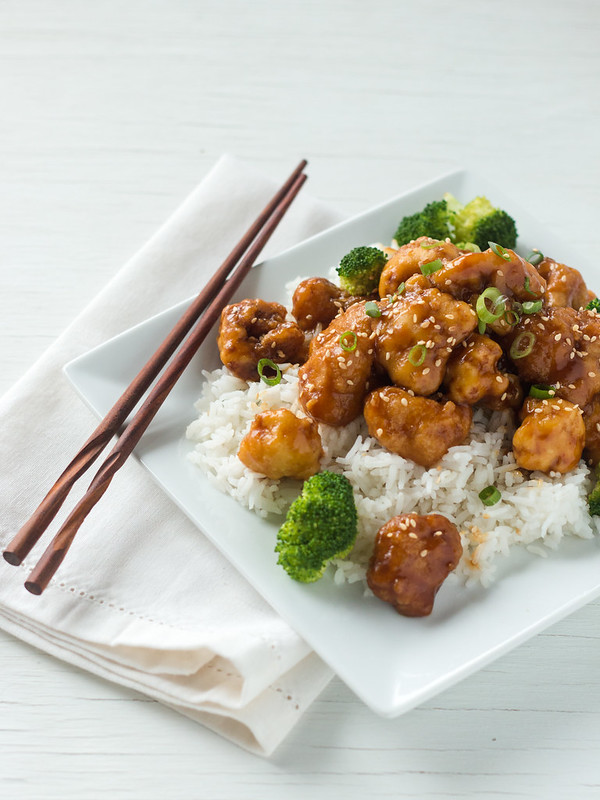 Ever since I was little, ordering General Tso’s has been a huge treat. Deep fried, sugary-glazed, and addictive as hell… I can make an order of General Tso’s disappear faster than you can say “alakazam.”

Unfortunately, I can also make it reappear somewhere around the top of my jeans a few hours later, which is why it’s become an increasingly more rare treat.

Then, a few weeks ago, I saw something new on the menu of one of my favorite restaurants: an appetizer of General Tso’s Cauliflower. Of course I had to order it, and once tasted, I knew I had to figure out how to make it for myself. 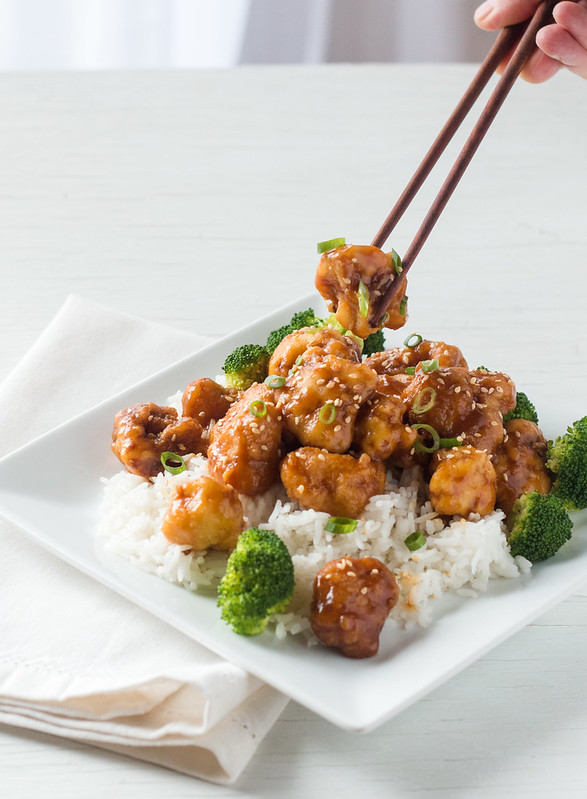 Because the sauce is really where the flavor is at, swapping the chicken for cauliflower really doesn’t affect the experience as much as you might think.  To get the crispy-fried exterior, I used a batter of gluten-free garbanzo bean flour and corn starch. Sure, you can skip the frying all together and oven-bake the cauliflower (a perfectly viable and no doubt healthier option), but then you’d be missing out on the crispiness that really makes General Tso’s so satisfying.

The biggest up-side to making this dish at home as being able to control all the ingredients. I used honey in place of sugar in the sauce, and was able to balance the levels of heat and sweet to exactly what I like.  With a few adjustments it could easily be made gluten-free or vegan, or tweaked however you like.

To be honest, I’m a little concerned about how easy this is to make from scratch. Not to mention all the possible variation there are with the sauce — it comes together in minutes, and tastes so good I kind of want to lather it on everything. Like sauteed veggies, or grilled meats, or my face. I might even try it for dipping my next batch of spring-rolls in, in place of my go-to peanut sauce. Yes, it’s really that good. 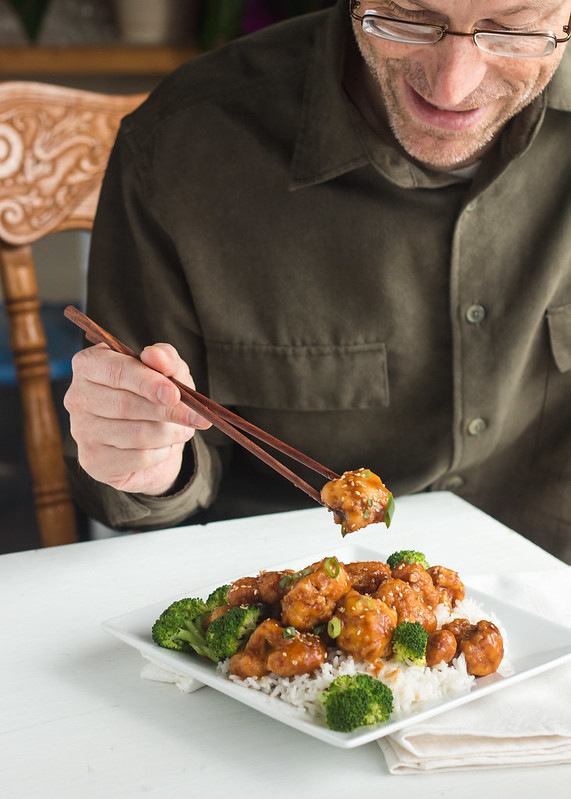 You see that look on his face? That’s the look of my hand model about to ruin the shot by eating the star of the show. The perks of being married to a food blogger, as he likes to say.

Steamed rice and broccoli, for serving

Method
For the sauce:
1. In a skillet over medium heat, add the sesame oil, garlic, and ginger. Saute for 1-2 minutes, then add the hoisin sauce, vinegar, soy sauce, honey, red pepper flakes, and sriracha. Stir to combine, and let cook for another 1-2 minutes.
2. In a bowl or glass measuring cup, whisk together the water and corn starch (start with just a small amount of water, and mix until smooth to avoid lumps). Stir the water and corn starch mixture into the pan, and let cook for 3-5 minutes, or until the sauce has thickened. Taste, and add more sriracha or red pepper flakes as needed. If the sauce becomes too thick for your liking, add a splash more water.

For the cauliflower:
1. In a bowl, whisk together the garbanzo bean flour, corn starch, baking soda, salt, and water. Cut the cauliflower into evenly-sized florets, and toss into the batter until well-coated.
2. In a large heavy-bottomed pot, heat 2-3 inches of oil to 375 degrees F. Line a rimmed baking sheet with paper towel, and set aside.
3.Carefully drop 4-8 florets into the oil at a time, being careful not to over-crowed the pot. Fry for 1-2 minutes, or until golden brown and crispy.
4. Using a metal slotted spoon or a skimmer, remove the cauliflower to the paper towel lined baking sheet to drain. Let the oil return to 375 degrees, and repeat until all of the cauliflower is cooked.
5. When ready to serve, toss the fried cauliflower into the sauce. Serve immediately over steamed rice and broccoli, and garnish with toasted sesame seeds and sliced scallions.

Recipe notes: I love the crispiness of deep-frying the cauliflower, but when I’m not in the mood for heating up a big pot of oil, I bake it instead. Here’s what I do: skip the batter all-together (I’ve tried many different recipes, and have never been able to get a crispy-battered cauliflower in the oven — if you know of a recipe that works, I’d love to hear about it!). Preheat the oven to 425 degrees F., and cut the cauliflower into florets. Toss cauliflower with a few TBSP of olive oil and a big pinch of salt, then spread into an even layer on a rimmed baking sheet. Cook for 20-25 minutes, stirring once or twice, until golden around the edges. This is one of my favorite ways to enjoy cauliflower all on its own, too!

The internet and I, we're best buds. Whenever I'm in need of cute cat videos, or can't remember who that...