It’s amazing how people change as they grow older. When I was a kid, I used to think that when I grew up, I would eat cookie dough and ice cream (or cookie dough ice cream) for every meal. You know, because I was grown up and could eat whatever I wanted, and why wouldn’t I want to eat cookie dough and/or ice cream? And nothing else.

But now look at me. Eating vegetables, and everything!

I’m exaggerating, of course. I actually liked vegetables more than the average kid. However, there were quite a few things I didn’t like then, that I do now. I didn’t like olives, or brussels sprouts, or blue cheese, or barbecue sauce (I know, what’s wrong with me?!), and I certainly didn’t like fennel.

But, as I later learned, most of those dislikes came from not having the foods prepared properly. As it turns out, brussels sprouts are amazing when cooked well, and fennel can be so much more complex and subtle than I ever knew possible. (Don’t ask about the barbecue sauce thing — I’m giving that one up to my taste buds developing / coming to their senses as I got older.)

Listening to my parents talk about growing up on canned vegetables and dry, overcooked meat, it’s no wonder so many people are picky eaters. Even now, my dad will tell me about new things he’s discovering he likes which he never, ever thought he could based on his experiences with them as a kid.

I was fortunate to grow up eating pretty well, and liked most of the foods I tried. The few things I didn’t like have turned out to be because I had a bad introduction to them in some way or another, and I’ve since found better ways of preparing them.

One of my favorite methods for preparing vegetables is roasting. Roasted beets? Like candy. Squash and sweet potato, too. Cauliflower was made for roasting, because it deepens the flavor without turning it to mush, à la steaming or sauteing. And don’t even get me started on roasted garlic!

As for fennel, roasting both mellows and enhances the flavor. It takes a bulb that once intimidated me, and makes it warm and approachable. Pair that with a handful of crushed pistachios, and I’m won.

What foods have you learned to like, or grown to love? Were there any foods you liked as a kid that you don’t like now? Let me know in the comments below!

*for a richer, creamier soup, replace 1-2 cups of stock with milk

Method
1.   Preheat oven to 400 degrees F.
2.   Cut the cauliflower in half and remove the core and leaves. Chop roughly into florets, and place in a large bowl.
3.   Cut the fronds away from the fennel bulb, and set them aside. Wash the bulb thoroughly, then cut in half and remove the core, and any outer layers that are loose or damaged. Cut into chunks roughly the same size as the cauliflower florets, and add them to the bowl. Peel the garlic cloves and add them to the bowl.
4.   Toss the fennel, cauliflower, and garlic with the olive oil and salt until well coated, and spread on a rimmed baking sheet. Roast for 30-40 minutes, or until tender and cauliflower is browned at the edges.
5.   Meanwhile, toast the fennel seeds in a dry pan over medium heat until fragrant and slightly darkened in color. 2-4 minutes, stirring frequently.
6.   Add the roasted cauliflower, fennel, and garlic to a large pot along with the vegetable broth and toasted fennel seeds. Puree with an immersion blender until smooth. (Or, transfer the cooked vegetables straight from the oven into your blender, along with the vegetable broth and fennel seeds, and puree until smooth (this should be done in batches). Then pour into a large pot on the stove.)
7.   Heat over medium-high until the soup is warmed through. If the soup is too thick, add a bit more stock. Add the cayenne, nutmeg, and salt and pepper, to taste.
8.   Serve warm with crushed pistachios and a few sprigs of fennel for garnish. 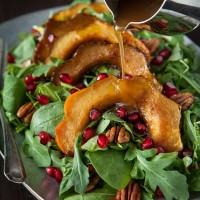 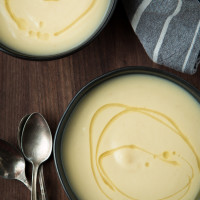 I have a secret to tell you. Are you ready? Homemade marshmallows are really, really easy to make. The Stay-Puffed...