This summer has had a lot of ups and downs so far. It’s been cold, then sweltering hot, then nice and cool again. Last week was a real heatwave — not record breaking, by any means, but the heat was unceasing and inescapable. There were days on end where it barely got below 80 degrees F. at night, and was well into the 90’s during the day.

One afternoon I got into my car, and instantly broke into a heavy sweat. “It’s like an oven in here!” I thought to myself… and that gave me an idea.

Without any air conditioning in our house, it had been far too hot to cook inside… but I wondered, could I bake in my car?

The next day, I took my point-and-shoot thermometer out to my car, and this was the reading it gave off the dash: 188 degrees F. 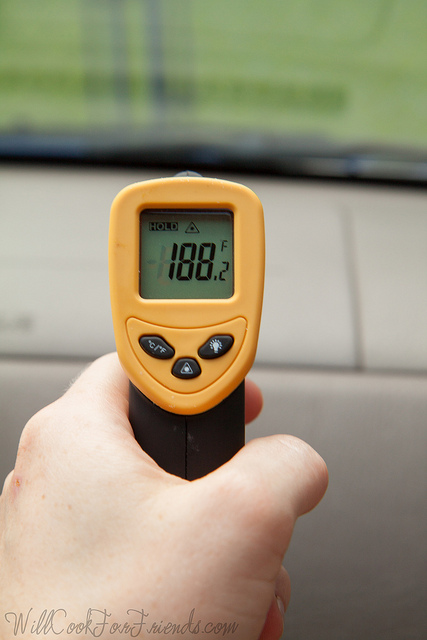 I should note that on this particular day, it only got up to 90F outside — one of the coolest days that week. Inside my car, however, it was nearly hot enough to boil water (212 degrees F), and as it turns out, well over the temperature needed to cook an egg (158 degrees F).

Now, I realized this wasn’t going to be hot enough to cook very many things… the raw dough of a pizza crust, for instance, would need significantly higher temperatures, especially if I had any hope of it being crispy. So instead, I opted for a pre-made naan flat bread as the base for my pizza, and decided to only rely on the heat of the car to melt the cheese and warm everything through. This was just an experiment, after all, and I still wanted to eat afterwords!

Well, there’s a photo I never imagined myself taking.

I prepped the flat breads with a bit of tomato sauce, cheese, a few slices of fresh tomato, and some basil leaves. I set the baking sheet on the dashboard of my car ahead of time to pre-heat (words I never thought I’d be saying), then carried the pizzas out and slapped them down, almost burning myself on the pan in the process.

If my neighbors saw me going to-and-from my car with my camera, food, and oven mitts… chances are they think I’m crazy. Not that they needed any more reasons to think that.

Twenty minutes later, I came back out to check the progress. Amazingly, the cheese had already become melty, and the basil had actually dried up and become almost crunchy! Note to self, if it isn’t too humid out, the car can work as a dehydrator.

That’s what I call solar-power! Little did I know when I purchased my car, I was actually getting a high-tech piece of outdoor cookware. Had I planned ahead a little better, I probably could’ve set up some kind of aluminum foil reflectors to intensify the heat even further, but as it was my pizzas appeared to have turned out  just fine.

I pulled the tray from my car (hoping my neighbors weren’t watching…) and sliced into one of the pizzas. The cheese was melted, and just shy of being completely gooey. The flat breads themselves were warmed all the way through, and the tomatoes were hot and full of flavor.

Success! Not only did I have a tasty dinner without turning on the oven or stove, but my car also smelled completely delicious. Double win!

(Note: I’m still jealous of all you people with air conditioning, who can cook in your homes all year-round. I also wish I had a grill or other outdoor cookware… you know, besides my car. *sigh*)

What are some of your crazy ideas, and have you put them to the test? Share in the comments below!

Monday Musings: Why Recipes Don’t Always Turn Out Like They Should

18 Responses to Dashboard Pizza – Cooking With The Sun (FAK Friday)

Life is complicated. It is hectic, and messy, and intricate, and beautiful, and no matter how hard I may try...