Tell me you can’t see the steam coming off there… oh yeah, they’re fresh.

Over the weekend I went to the grocery store with this list:
Vegetables.
Fruit.
Lentils?

At the time, I didn’t know what I wanted to do, just that I wanted – no, needed – fresh produce. As soon as I stepped into the store I got all googly-eyed like a kid in a candy shop, and my mind began running an overload of ideas. I knew the basics, but what would I do with them? Grabbing up every ripe fruit and vegetable I could find, I slowly began to come up with a plan.
Where I had first been considering lentils, I changed my mind as soon as I saw the wild rice. Of course, that opened up so many more possibilities for  me – how would I serve it, and more importantly, how would I season it? Did I want a pilaf, with roasted squash and dried cranberries? Did I want to make a curry? Add some beans? Do a stir-fry? Sear some meat? My mind was racing with every ingredient I saw… until I came to the mushrooms. That settled what flavor I would go for, but next was how I would serve it… well, with all the veggies in my basket, that decision wasn’t hard.

I checked out with three bags full of produce, and not a single worry that any of it might go to waste.

Ingredients in hand, I went to work like a mad scientist, throwing in a pinch of this, a dash of that, until my potion was complete. Needless to say, veggies don’t need much – I kept things simple and let the food I was using bring the flavor.

1 cup uncooked Wild Rice (or you could do a mix of rice and beans, or lentils, or quinoa)
4 bell peppers, whatever colors you like
3 cups vegetable broth
2 cups sliced or diced mushrooms (I used a mix of cremini and shitaki, though this dish would have greatly benefited from some oysters or dried porcini as well)
1 medium onion, diced
2-3 cloves garlic, minced
Olive oil (or butter, but I wanted to keep this one vegan)
Salt and Pepper to taste
Dash of cumin (optional)
2-3 TBSP good balsamic vinegar (optional – if you don’t have the good stuff just leave it out)
1/2 cup chopped and toasted pecans or almonds (optional)
1/4 cup dried cranberries or cherries (also optional – I opted out on these)
1/2 water, more vegetable broth, or a can of tomatoes….

Method:
In a medium pot, add the wild rice and vegetable broth, plus a dash of sea salt. Bring to a boil, and cook for maybe five minutes before reducing heat to low and covering. Let cook for 45-55 minutes, or until the rice is tender. For stuffing the peppers, I kept it a little al-dente.
(While the rice was cooking, I roasted a bunch of vegetables in the oven – recipe follows).
Toast the pecans or almonds in a dry skillet (or with a little butter) over medium heat, stirring frequently and being careful not to burn. After a minute or two they should be darkened slightly and have a nutty aroma. Remove from pan and set aside.
Preheat oven to 350f.
Towards the end of the rice cooking, heat a pan with some oil or butter. Add the onion, and cook for about a minute. Add the garlic and stir for 20-30 seconds until it blooms a little.
Then add all the mushrooms to the pan (if you’re using dried, reconstitute in a small bowl or glass with boiling hot water for a few minutes first) – cook until the mushrooms begin to caramelize, maybe 10-15 minutes, stirring from time to time. Keep the heat low enough that you don’t burn the garlic.
Add a pinch of salt, pepper, and a dash of cumin here, if using.
Once the rice has finished, add the onions and mushroom mixture to the rice and stir to combine. Add the balsamic vinegar, pecans, and dried fruit if using. Taste and adjust seasoning.

To stuff the peppers, slice the tops off and remove the seeds and veins from inside. If the peppers don’t stand up on their own, slice a small amount off the bottom (trying not to cut through to the inside) to give it a flatter surface. Fill each pepper with the rice mixture, tamping it in and mounding it slightly. Set peppers in a casserole dish, and add water, or more vegetable broth, or a little tomato sauce… really, any kind of moisture… just enough to cover the bottom of the dish. This is to keep the peppers from burning onto the dish and then the skins tearing when you try to take them out.
(It might be nice to add brush the pan with a little olive oil, then through in some chopped and seasoned vegetables to roast along with the stuffed peppers).
Bake at 350f. for about 45 minutes, or until the peppers are tender but not too mushy. You can roast them with or without the pepper-tops.
Serve hot, and enjoy!

Being on such a vegetable kick, I couldn’t just stop there. While I had the rice going, I cubed up a bunch of veggies and roasted them. This is super easy to do, and you can use whatever you like or whatever is in season.

I chopped all the vegetables into hearty chunks, tossed them in a bowl with the olive oil and seasonings, then spread them onto a baking sheet and roasted on the middle rack at 425f. for about 35-45 minutes. The time will vary greatly depending on what veggies you use, and how large you chop them. Just keep on eye on things and give them a stir about half way through baking.
For easier cleanup, you can line your baking sheet with aluminum foil, but this isn’t necessary to prevent stickage.

Since I was only making two stuffed peppers, I went ahead and served the leftover rice as a bed for my roasted vegetables – mmm!

This time of year it would’ve been lovely to do a pan full of roasted squash – not just butternut, but acorn, and dumpling, and anything else you could find. I would’ve snapped up every squash in the store (to heck with bell peppers, I’d have used gourds!), but I felt like I was already pushing things with the butternut, seeing as The Boyfriend isn’t a fan. But, if he picks around them, that just means more for me!

After walking dogs in the rain all day Monday, this was the perfect warm and easy dinner to come home to. Not to mention left-overs to wake up to the next day! 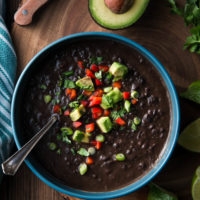 Gift Box Cake – surprise! I didn’t get you an actual present.
Two Tasty Twists on Tuna Salad – get lost, Mayo!

Gift Box Cake – surprise! I didn’t get you an actual present.

The Gift Box Cake - perfect for those times you just don't know what to get someone! This year, my...