Ah, tuna fish – to what standards hath thou sunk? Canned and sitting on shelves, neglected… how few get to know you for what you really are!

Thanks to my scandalous affair with my local fish monger, I was able to flirt my way into a cheap deal on this impeccably fresh Ahi (yellowfin) tuna. …Either that, or it was on sale. I don’t remember. 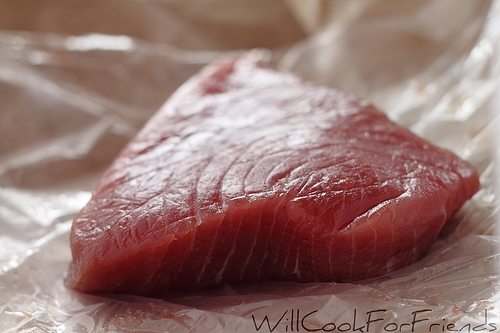 Keeping with my seafood loving trend of eating fish at least once a week, mixed with my life-long infatuation with salads, I knew exactly what to do with this fine specimen.

Tuna is often served rare, because unlike red meats it doesn’t contain very many dangerous bacteria. It can, in some cases, have other things to fear such as parasites – so if you’re planning on serving your tuna lightly seared, or as sushi, be sure to get sashimi grade fish. Just ask your fish monger when you’re buying whether it’s acceptable for raw consumption. If you have any doubts or concerns, feel free to cook your tuna steak longer, but note that it will lose much of its flavor and moisture when well-done. 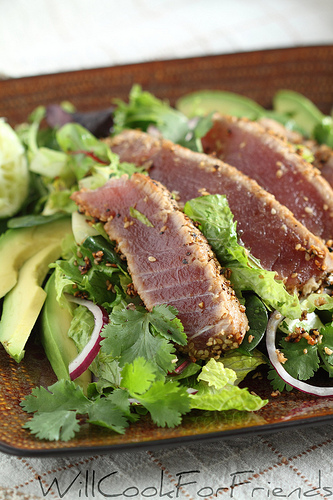 (Seared or grilled, this salad is rockin’!)

Fresh mixed greens and vegetables of your choice (I used a mix of baby greens, spinach, romaine, cilantro, and sliced red onions and avocado)

Method:
In a bowl, combine the first nine ingredients to make a marinade. Place the tuna steak(s) into a large zip-top bag and pour the marinade over top. Squeeze out as much of the air as you can, seal, and let sit in the fridge for at least 30 minutes and up to a few hours.

Meanwhile, mix the salad dressing. Add all ingredients to a bowl and whisk to combine. Set aside.

Once it’s done marinating, coat the tuna in the sesame seeds and a little black pepper. Heat a heavy bottom skillet over medium-high and add both the olive oil and sesame oil. You want the oil shimmering, but not smoking.
(Note: if you have a grill, feel free to add the sesame oil to the tuna’s marinade and then throw it on the grill for a couple minutes instead of pan searing it.)
Add the tuna to the pan, and let cook for about 2 minutes – do not stir or move the tuna around. Flip, and let cook for another 1.5 – 2 minutes. Remove from heat.
If your tuna is not sashimi grade, or if you’d like it more well-done, feel free to leave it in the pan longer. I suggest reducing the heat to avoid burning.

Toss your salad mixings with the dressing, and slice the tuna thinly against the grain.
Serve the tuna still warm atop a bed of lightly dressed greens, and enjoy! 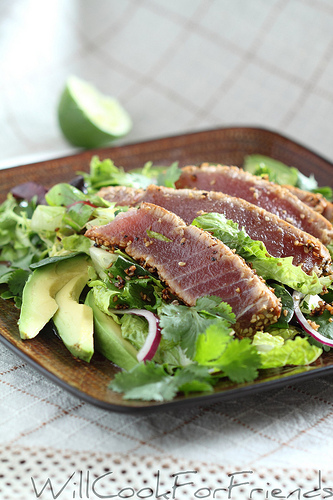 Now that is what I call Tuna Salad! 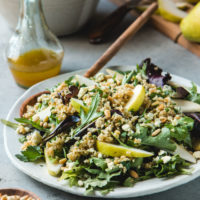 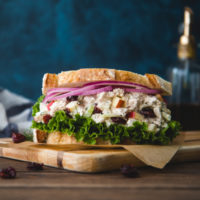 (Potato Pancakes, served here with sour cream, applesauce, and a dash of cinnamon - recipe in post.)Credit goes to The...