Stuffed Portabella Pizzas are a fun, easy game-day appetizer, or even a light dinner when you’re craving pizza but not all the carbs. Read on, or jump straight into the recipe HERE. 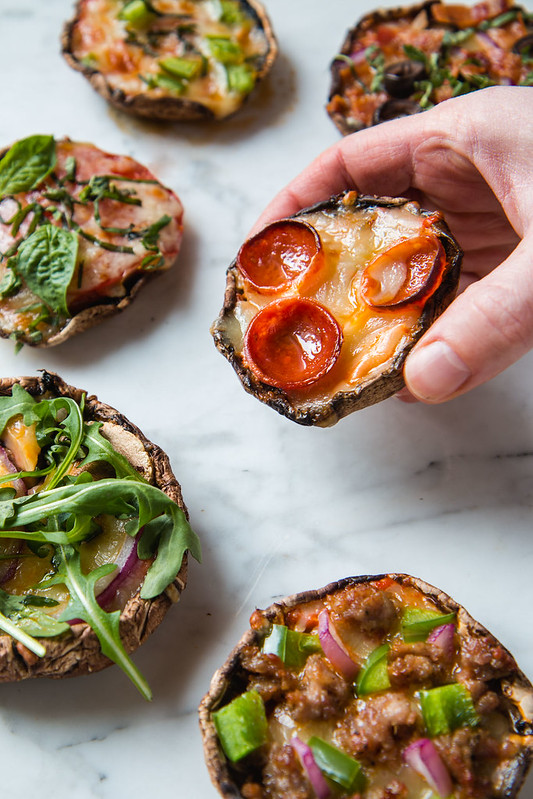 When I was a teenager, I was obsessed with the idea of stuffed portabella mushrooms. Portabellas just seem like they’re meant to be filled with delicious things, don’t they? It’s like nature said “here, have a bowl.” Thanks, nature.

Combine that with the other thing teenage me was obsessed with (pizza, duh) and you get these: Stuffed Portabella Pizzas.

Aka, porta-pizzas. Not to be called porta-pies, because that sounds way too much like porta-potties. Ew. Porta-pizzas it is. 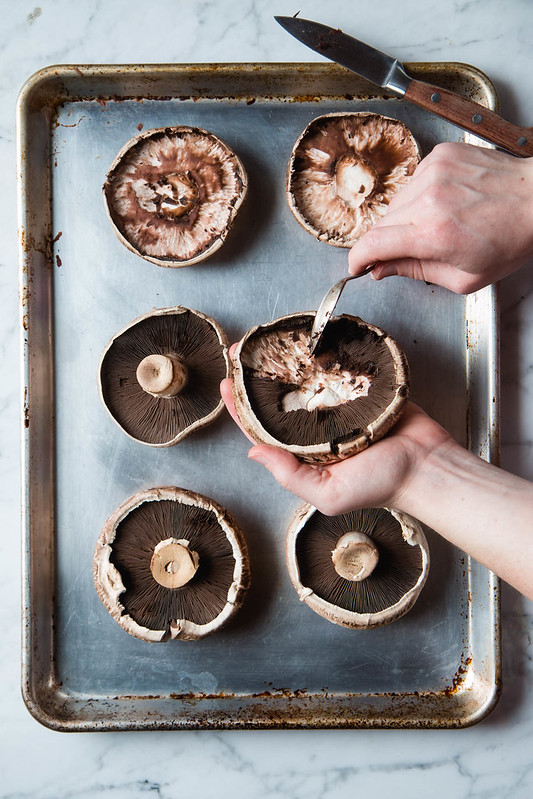 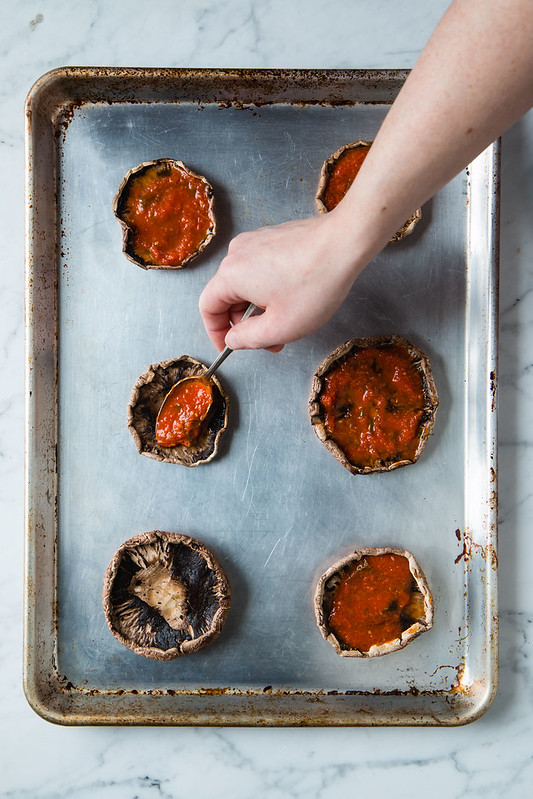 There is one hitch when it comes to stuffed mushrooms, and that is: mushrooms have a ton of moisture in them. Fill ’em up with tasty ingredients, bake, and voila, you’ve just made a soggy, soupy mess. Wa-wa-waaaaa.

I wasn’t savvy enough to figure this out as a teenager, but fortunately, adult-me knows a work around. By scraping out the gills with a spoon and baking the mushroom caps for a few minutes before stuffing them, you can effectively cook out some of their liquid and drain it away.

Add your filling as you normally would, pop ’em back under the broiler for a few minutes, and now we’re talking. 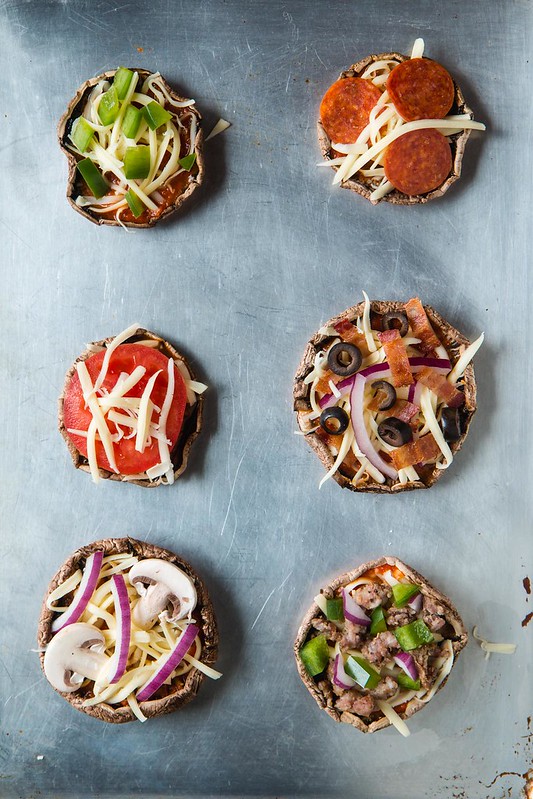 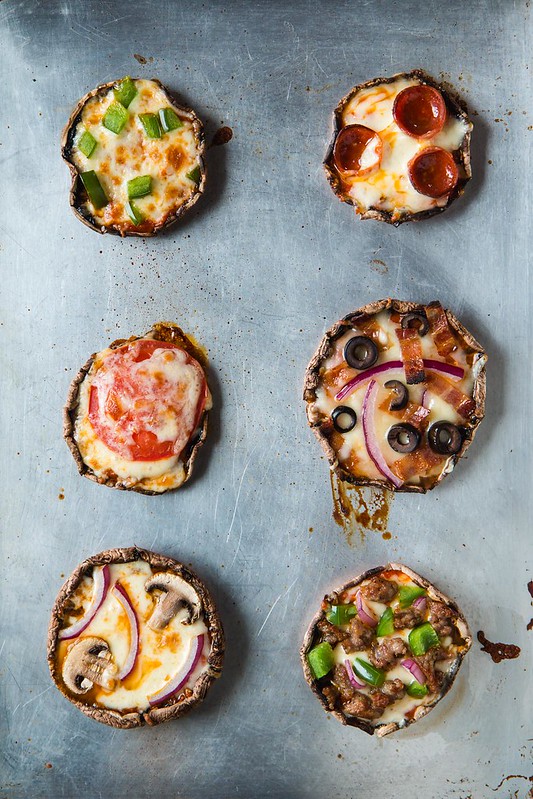 I was actually really surprised with how pizza-like these were. (I’m one of those people who thinks the best part of the pie is the crust, so I was skeptical to say the least.) Obviously, they won’t replace pizza all together in my life, but they can certainly stand in as a fun way to lighten things up when cravings strike.

If you’re serving these as a meal, I’d say you want 2-3 per person. For appetizers, just one or two will do. Of course, it all depends on the size of your mushrooms, so YMMV. I was a little disappointed with the selection my grocery store had this time (they were almost sold out!) so my mushrooms are a bit all over the place in size.

As for toppings, you can use whatever you like on your pizza. I made a bunch of different ones, some with meat and some without. If you wanted to make them vegan, you could probably use your favorite cheese substitute in place of the mozzarella, too. 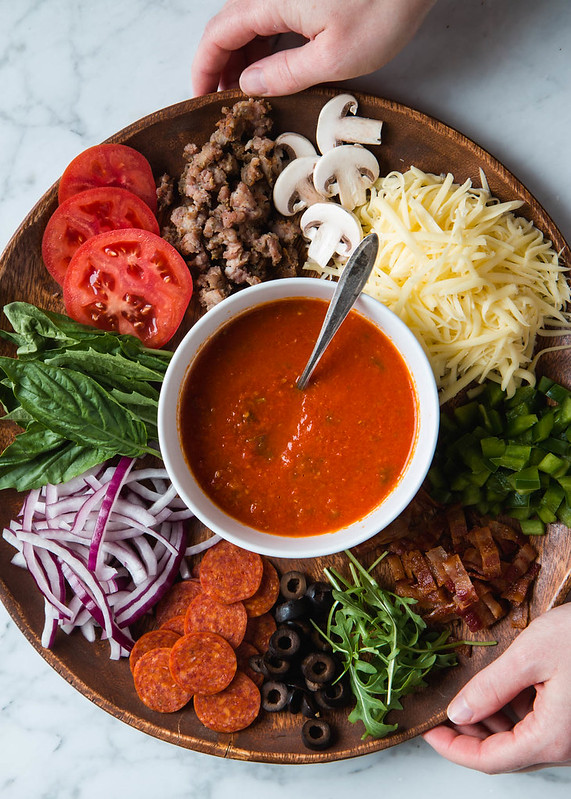 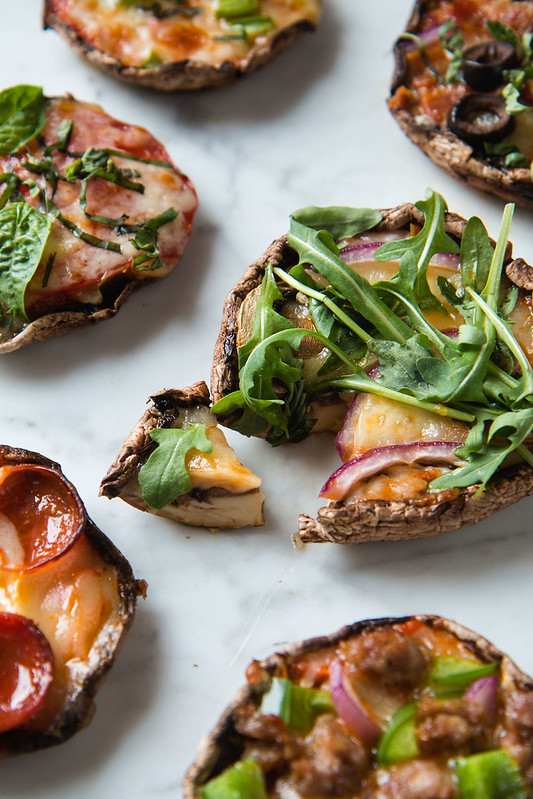 And yeah, I totally put some mushrooms on my mushroom stuffed pizza. It’s like pizza inception y’all.

What’s your favorite pizza topping? Share in the comments below!

Print
Prep time
10 mins
Cook time
15 mins
Total time
25 mins
These stuffed portabella pizzas are a quick and fun appetizer, or light meal. I've included some suggested toppings in this recipe, but feel free to mix it up and use what you like. By controlling the toppings, you can make these vegetarian, or even vegan.
Author: Willow at Will Cook For Friends
Recipe type: gluten-free, low carb, easily made vegetarian or vegan
Serves: 3 servings (two mushrooms a piece)
Ingredients
The Basics:
Toppings (these are just some suggestions -- use any or all that you like. You'll only need a small amount of each for these mini-pies):
Instructions
Notes
You can fill these porta-pizzas with anything you like. I've included some suggestions in the recipe above, but feel free to think outside the box and use what sounds good to you!

One other option, which I didn't try this time but plan on doing next time, is to use a little of your favorite barbecue sauce in place of the marinara. Top with shredded chicken and sliced red onions, and you've got yourself a barbecue chicken pizza! If you want my favorite BBQ sauce recipe for this kind of pizza, you can find that here: Barbecue Chicken Pizza With Homemade Sweet Baby Ray's Barbecue Sauce.
3.5.3226

This simple and elegant Citrus Baked Arctic Char is also one of the easiest to prepare -- all you need are...