Everyone should have an amazing stuffed pepper recipe in their pocket, and these chorizo and black bean stuffed poblano peppers are mine. They pack a punch of flavor, and are ridiculously easy to make. Jump ahead to the recipe here, or read on and get it at the bottom of this post. 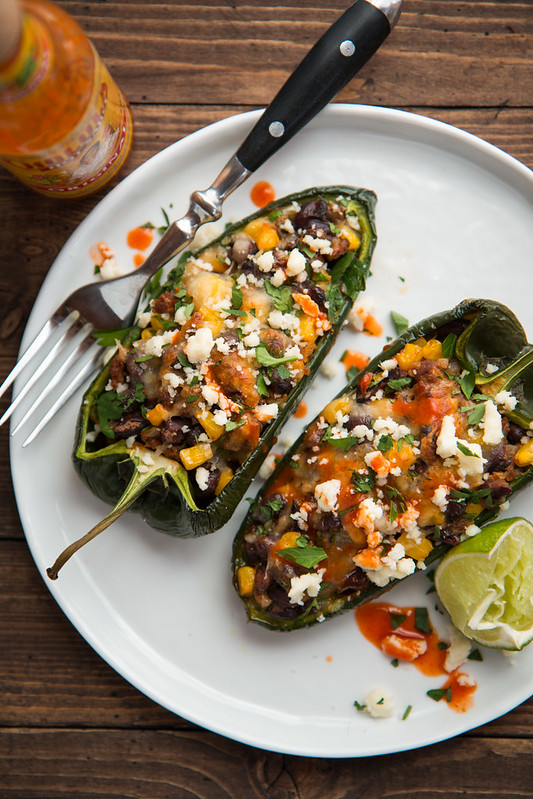 Stuffed peppers have a tendency to bore me. I hate to admit it, but it’s true: when I think of stuffed peppers, I think of bland rice and watery tomatoes. Not all recipes are bad, of course, and there are even some I’m very fond of… but seldom do I actually find myself craving them. These chorizo and black bean stuffed poblano peppers, though — they are one of the few.

If there is an opposite to bland and boring, these stuffed peppers are it. They are brimming with flavor from the chorizo, cheese, and the poblano peppers themselves, which have a mild, gentle heat, and act like less of a vessel for the filling and more like a warm hug, holding it all together. 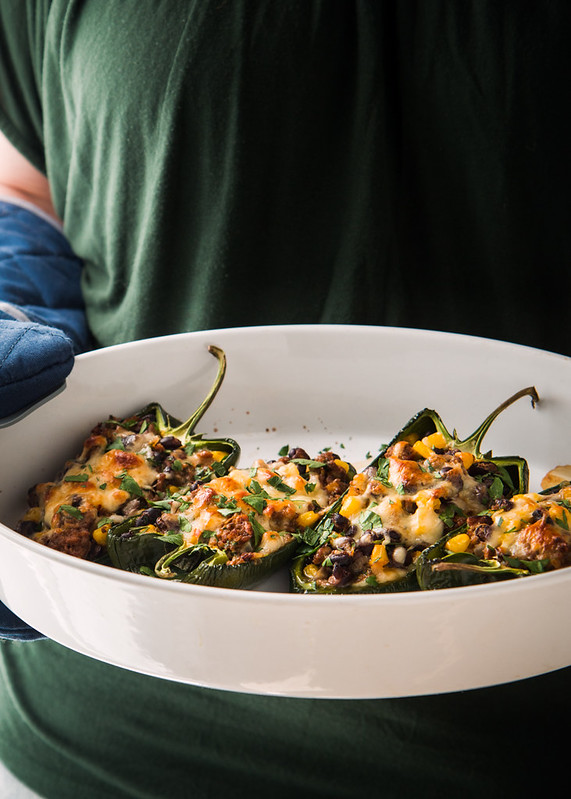 Besides the peppers themselves, the star of the show is the chorizo — in this case Mexican chorizo, made of ground pork flavored with handfuls of spices like garlic, cumin, chile powder, and paprika. Because the meat plays such a big role in the flavor of these peppers, it’s important to use a good quality variety you like. Chorizo can range from fairly mild, to quite spicy, so if you aren’t sure where to begin, ask the people behind the meat counter what they would recommend.

I got my chorizo from a local place that makes their own sausages and such, but have had good luck with the chorizo at Whole Foods, too — when they don’t have it in stock, give them a call and they’re usually happy to make a fresh batch. Alternatively, you can make your own using ground meat and spices (this recipe looks like a good one).

Once you’ve got yourself some chorizo and peppers, the rest is easy as pie. Or stuffed peppers. Or whatever. 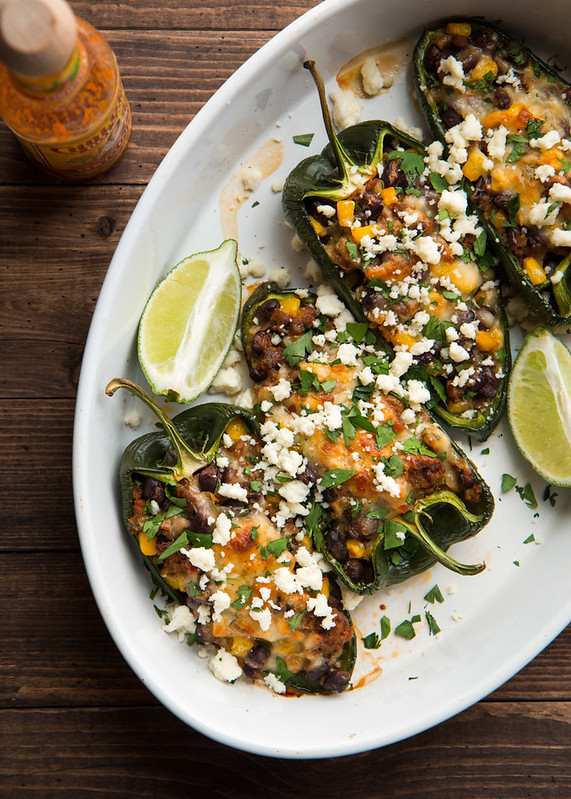 The chorizo gets cooked with onion and garlic, then mixed with plenty of black beans, corn, and fresh cilantro. (A word about cilantro: I have yet to meet a recipe that hasn’t survived just fine by swapping it for flat leaf parsley. If you can’t stand the stuff, just use parsley in its place, and all will be delicious.)

While the filling cooks, get your peppers ready for stuffing by slicing them in half lengthwise, and removing the seeds and veins from inside. Poblanos are mild by nature, but have a tendency to vary from plant to plant so that every once and a while one will surprise you with a kick. Most of the heat is held in the seeds and veins, so the more thorough you are in removing them, the milder the result will be. 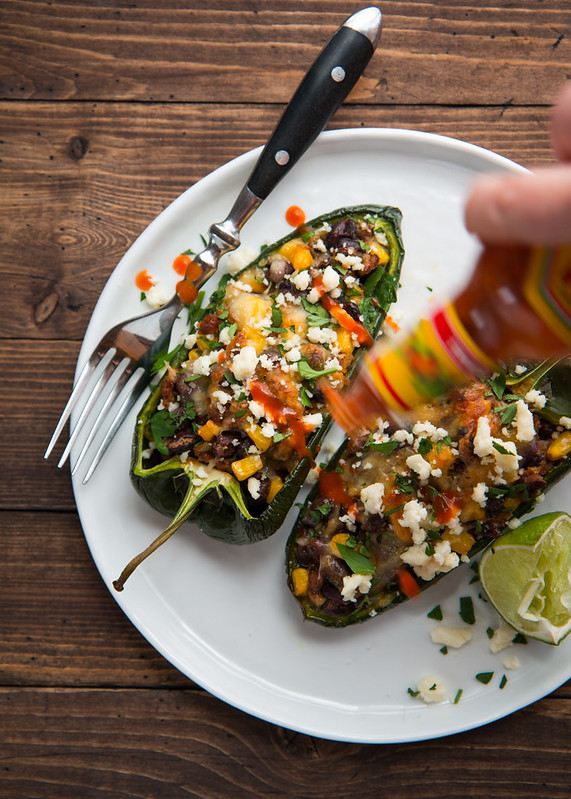 When it comes to stuffing your peppers, my suggestion is to pack as much filling into each as you can. If you happen to have leftover filling, no pablano! It makes the perfect base for so many things — you can fill quesadillas with it, stuff it inside a baked potato, spoon it over rice, top it with a fried egg, or load up a plate of nachos with it. Or just eat it with a spoon, because it really is that good. In fact, now that I think about it, you might just want to quadruple the amount of filling and pop it in your fridge for easy weeknight dinners.

What’s the best stuffed pepper you’ve ever had? I’d love to hear about it in the comments below. And if you don’t have one yet, might I recommend…

Print
Prep time
10 mins
Cook time
35 mins
Total time
45 mins
These peppers are packed with flavor, and incredibly easy to make. Serve them just as they are, or with a side of brown rice, quinoa, or other grain for a heartier meal. Naturally gluten-free.
Author: Willow at Will Cook For Friends
Serves: 8 small servings or 4 large servings
Ingredients
For the peppers:
Optional, for serving:
Instructions
Notes
Depending on the size of your poblanos, this recipe should make just about the right amount of filling... but if you happen to have a little extra, don't let it go to waste. Once you've cooked up the filling, you can keep it in an airtight container in the fridge for up to a week, and use it for all kinds of things -- fill quesadillas with it, stuff it inside a baked potato, spoon it over rice, top it with fried eggs, or make the most amazing plate of nachos. In fact, now that I think about it, you might want to just go ahead and double or triple the amount of filling here, because there are just so many uses for it!
3.5.3208
LIKE IT? SPREAD THE WORD:

Sweet, spicy, and oh so addictive. These Asian chili garlic noodles are a must in your weeknight dinner repertoire. Jump to...