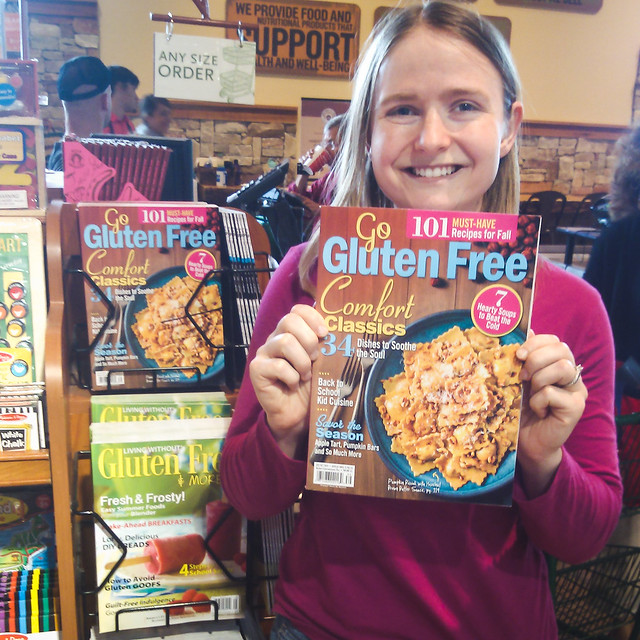 It was just a normal Friday afternoon, walking through Whole Foods, when what do I see staring back at me in the checkout lane?

My photo on the cover of a magazine! Not a photo of me, of course, but a photo I had taken, all smooth and satiny and printed on real, physical paper and everything.

I’m pretty sure my squeals of delight caught the attention of more than a few shoppers, but I didn’t care one bit.

I have been so excited for this moment, ever since Go Gluten Free contacted me a few months back and asked if I’d be interested in shooting the cover of their fall issue. (Interested? Me? Hmm, lemme think about that… YES.) I was so eager to share my excitement with the world, but at the same time I was too afraid to say anything because… what if they didn’t like my work? What if something went wrong? What if I totally botched the photos? What if my recipe SUCKED? 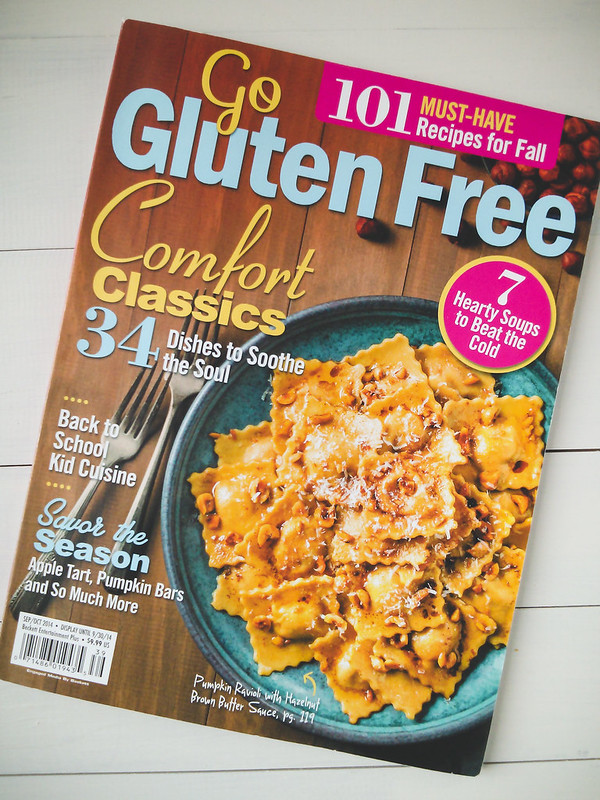 Well, it didn’t. *Whew* In fact, I’m super proud of this recipe.

I made something like ten batches of ravioli in about two weeks. The first photoshoot I did, I spent twice as long photographing as it had taken me to make the pasta (and we’re talking hand-rolling and shaping about 4 dozen ravioli). I filled my entire memory card with photos, half of which were blurry because my hands were shaking so much. You know you’ve gone a little overboard when your 32 gig storage device tells you it’s run out of space, but I couldn’t help it.

A couple more batches of ravioli, and another photoshoot later, I submitted my final image. I then proceeded to hit “refresh” on my email every five minutes waiting for a response (which was silly, because I submitted my image on a weekend). When the response did come in, it was a nonchalant, “looks great, thanks!”

At least, that’s the abridged version of the story. The whole story has a lot more of me panicking, and asking the editor of the magazine questions like “what fork should I use,” (as you can see, I chose to go with two forks, because really, two must be better than one, right?) and crying over the precise placement of hazelnuts… but you don’t need to hear about all that. 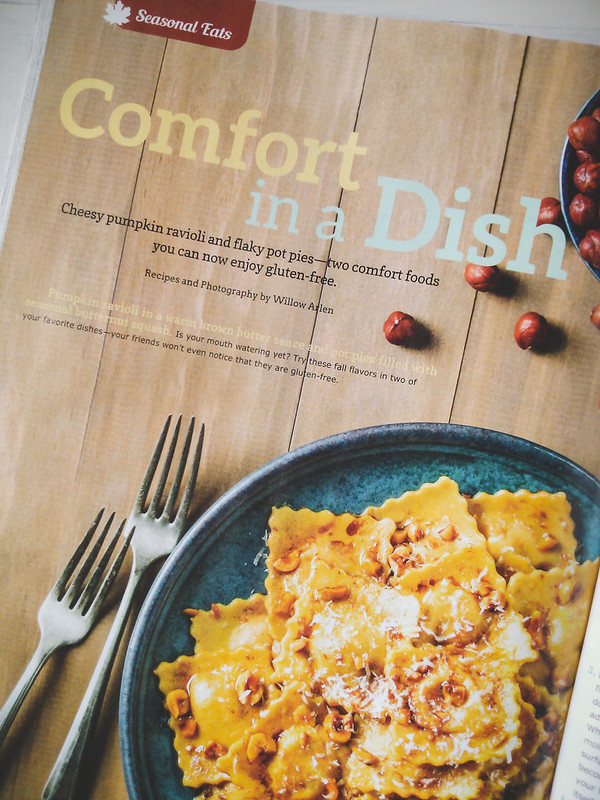 Also inside this issue of Go Gluten Free are recipes from a few of my favorite bloggers. Like gluten-free and vegan Cinnamon Rolls, Pumpkin Bread, and Cranberry Orange Bagels from Cara Reed of Fork & Beans (who, for the record, is the reason I am on the cover — it was a guest post I wrote for her ages ago that first caught the attention of the editor of the magazine). Also, Cinnamon Sugar Doughnuts from Meg of Beard and Bonnet, Homemade Irish Cream Liqueur from Alanna of Bojon Gourmet, and a whole slew of recipes from Mellissa of I Breathe I’m Hungry… just to name a few!

Needless to say, I’m pretty geeked to be included in a publication with these ladies. I feel like just by sharing pages together, we have a special bond. Even if it is an imaginary bond I just made up.

The only bad news is, I can’t share this recipe with you here on the blog — you’re going to have to go get yourself a copy of the magazine if you want to make it. I know, I know, total self promotion, here… but seriously, go buy it. I want you to make this recipe so bad, it hurts.

(Bonus, I also have a recipe for gluten-free pot pies with butternut squash and rosemary in there, which are pretty much the best pot pies I’ve had to date. Just sayin’.)

For those interested in picking up a copy: the availability of Go Gluten Free varies depending on location. It is carried in some Whole Foods, Barnes and Nobles, Targets, Walmarts, CVS, and Sprouts.

You guys. This is it. I finally bought a grill. This has been on my wish list for years, and...