I have a confession to make. I have never successfully made crispy sweet potato fries. Until now.

Every once and a while I come across a simple culinary task that renders me completely inept. I know plenty of people who turn out perfectly crisp sweet potato fries every time, with no fuss. Somehow, that’s not the case for me. Instead they turn out limp, soggy, or a little burnt in an over-zealous attempt to crank the heat and get them crispy once and for all. And I know I’m not the only one.

A quick search turns up nearly a dozen different methods suggesting how to make perfect fries. I agree with many of them, in principal, and yet few have proved to be at all helpful. Finally I decided it was time I set out once and for all to solve this problem – for myself, and hopefully everyone else in my situation.

It’s FAK Friday (Feeding my Appetite for Knowledge) and this week my diet has consisted primarily of sweet potatoes, as I attempted again and again to produce the perfect fry. Now that I’ve done my share of tests, I’m sharing my findings in the hope that my experiences may shed some light for anyone else struggling with this simple spud.

The Quest for Crispy
First off, let’s get something straight. Sweet potatoes are not the same as yams. Here in the US, they are frequently (miss)labeled as yams – but just because the label says it doesn’t make it so. In fact, real yams, native to Africa and Asia, are of a completely different genus than sweet potatoes, and have an almost black outer skin similar to the bark of a tree.
While we’re at it, did you know that sweet potatoes aren’t even related to regular potatoes? They’re from two different families entirely, and while there are hundreds of varieties of potatoes, the sweet potato isn’t one of them. While regular potatoes find themselves sharing genes with tomatoes, peppers, and eggplants, sweet potatoes are more closely related to morning glories, a type of flowering vine. In other parts of the world sweet potatoes go by a range of different names, one of which being “batata”, a word which later morphed into the already well-known “potato”. Thus was born, the sweet potato. Who knew?
Okay, enough with the history lesson. On to the fries!

Let me start by saying you can make sweet potato fries by deep frying them, just like regular french fries… but for this experiment, I’m going to focus on how to get them crispy in the oven. Not only are oven-baked fries significantly healthier, but who wants to burn a half gallon of oil just for a snack? Not me, that’s who.
Just to clarify, when I say crispy, I mean similar in texture to a regular french fry – a bit of crisp to the outside, with a soft interior.
In order to figure out the best method, I went out and bought a bunch of sweet potatoes. I used a mix of both Garnet and Jewel, in case the variety made a difference. (It didn’t, though I found I liked the Garnet a bit better in flavor.) I researched every tip, trick, technique, and recipe I could find. Then I set to work testing each one. I tried them all with a range of different oven temperatures, as well as different thickness of potato, to see what would work the best.

I started by doing what most people do – slice a potato, drizzle with olive oil, sprinkle with salt, and bake. Easy peasy, as it should be. I tried many variations on this, lining my tray with parchment or foil, using more or less oil, cutting the fries thicker/thinner, baking at different temperatures… I learned a lot about what worked and what didn’t, but I still wasn’t getting a crispy exterior. I even tried one method which suggested turning on the broiler for the final moments of baking, which turned my fries completely black (see the middle image above).

Next I tried a few different recipes which called for soaking the fries in cool water for awhile, then rinsing and drying them before baking. The idea behind this method is that soaking will draw out some of the starches from the potato. Starch holds on to moisture, so less starch means a less soggy fry, right? It made plenty of sense to me, but my sweet potatoes didn’t agree. I found zero difference in the crispiness of the fries, and am pretty sure the insides were actually a little soggier than before. Almost as if they’d been sitting in water for a long period of time… strange.

Next I moved on to coatings. There are two main “techniques” out there for coating the fries. The first is to toss the fries in a lightly beaten egg white before baking, the theory being that the egg white will do the crisping, and act as a shell on the outside of the fry. I don’t like this method for a few reasons: one, I don’t particularly want to whip an egg white just to make some fries; two, it takes a perfectly good treat that can be enjoyed by anyone and makes it off-limits to those on diets or with egg allergies; and three, it simply doesn’t work that well. The egg white does become crisp, but it ends up tasting more like over-cooked scrambled eggs with a soggy fry in the center. Not the desired result, in my opinion.

The second “coating” method is to dredge the fries very lightly in cornstarch. This goes by similar logic to the egg white version, but unlike the egg white the cornstarch actually clings to the fries and helps absorb some of the moisture that comes out of them. I played around with this technique for quite a while, trying to get just the right amount of cornstarch (too much means gummy, yucky fries), before finally getting it to work the way it’s supposed to. While the cornstarch did create a somewhat pleasant texture, I found it left the fries with an odd flavor similar to that of raw flour, and a very greasy feel. Perhaps with heavy enough seasoning, this would be acceptable. (I should note, making a batter of cornstarch is a great method for getting extra crunch on deep-fried fries, but I found it didn’t work nearly as well in the oven.)

Just when I thought I had run out of ideas, it occurred to me that the problem might lie not in the technique I used, but the equipment. Was it possible my oven was the issue? Surely a convection oven would do a better job, but that couldn’t be the only answer. What about water vapor, which can sometimes be an issue in gas ovens? That couldn’t be it, because mine is electric. Still, I couldn’t help but wonder…

So I called up a friend of mine – one of those lucky people who make sweet potato fries all the time with no problems – and asked if I could borrow his kitchen. Well, he did me one better, and not only let me use his kitchen but walked me through exactly how he did things.

The biggest difference between the batch at my friend’s house and the batch at my house? The baking sheet. My baking sheets are rather thin, and have a black non-stick coating. His trays were much heavier-bottomed, and had no such coating. This created a much more even heat, and a much crisper caramelization on the outside of the fries.

Perfection!
I wish there were some grander finale to this tale than a baking sheet, but sure enough, those fries were perfect. I made batch after batch, and each time was the same. So what about you – do you have trouble getting crispy fries, and if so, what type of tray do you bake them on? I’d love to know if my theory is right!

Along my little journey, I learned a lot about what did and did not work. I know I’ve been a little round-about in getting to it, but here are my top tips for making perfect sweet potato fries:

How To Make Perfect Sweet Potato Fries
Tips, Tricks, and Techniques
So there you have it… no fancy tricks, just a little practice and the right equipment. Do you have any tips for making fries? Have you struggled with them in the past, and if so, was any of this helpful to you? Oh, and what’s your favorite seasoning to use? I’d love to know in the comments below!
LIKE IT? SPREAD THE WORD: 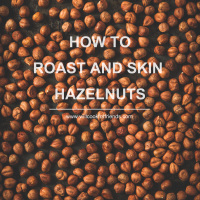 How To Roast And Skin Hazelnuts

30 Random Acts of Kindness in 30 Days – and then some!
Healthy Spring Rolls with Peanut Dipping Sauce, and The Importance of Listening

"In this life we cannot always do great things, but we can do small things with great love."-Mother TeresaAt the...