Leaven (lev-en): 1. a substance (as yeast) used to produce fermentation in dough or liquid. Or, a material (as baking powder) used to produce a gas that lightens dough or batter. Something that modifies or lightens. From the Latin, levare, meaning: to rise.

In the kitchen, leavening means one thing: bubbles. Bubbles of gas which add lightness, and when exposed to heat expand and give rise. There are several ways to leaven baked goods, such as yeast, baking soda, baking powder, air (as in creaming together fats or whipping egg whites), and steam (as in puff pastry, where the dough is folded over and over to make thin layers which pull apart from one another when steam is released during baking). Air and steam are present in all baked goods, but often times a recipe needs something more. Here I want to talk about the most common leaveners used in the kitchen: chemical leaveners (baking soda and baking powder) and yeast (active dry yeast and ‘instant’ dry yeast) and what the differences are.

It’s FAK Friday (Feeding my Appetite for Knowledge), and this week I’ve been filling my head with bubbles! No, I haven’t been drinking… much. I’ve been wrapping my brain around how leavening works to produce light and fluffy doughs, chewy and air-pocketty breads, flaky and tender cream puffs, and everything in between. I thought I’d share the basics this week, and answer some of the most common kitchen questions out there: what’s the difference between baking powder and baking soda // what’s the difference between active dry yeast and instant yeast?

Baking powder and baking soda fall into the category of chemical leaveners. This means they react with another substance to release carbon dioxide (gas). The gas forms trillions of tiny bubbles, which expand and give rise to baked goods. This happens very rapidly, which is why breads calling for baking powder or soda are called “quick breads”.
Baking Soda – is the chemical sodium bicarbonate. An alkaline compound which, when mixed with an acid, produces sodium acetate, water, and (you guessed it) carbon dioxide. Think of the volcano science experiment, where baking soda is mixed with vinegar to cause an eruption – that’s the reaction we’re talking about! Baking soda is therefore used in recipes which also contain an acidic ingredient, such as vinegar, lemon juice, buttermilk, yogurt, sour cream… even honey and molasses are acidic enough to cause a reaction.
When a recipe calls for baking soda, it must be mixed and baked immediately or else the gases will escape and the leavening power will be lost.
Baking soda is also great for cleaning messes and putting out fires – my mom always kept a box next to the stove to douse any unruly flames!

Baking Powder – is similar to baking soda, in that it contains sodium bicarbonate… but it also contains an acidic compound, as well as a little starch to keep the mixture from clumping. When mixed with water, the sodium bicarbonate and acid combine and react to create carbon dioxide. Just like the volcano experiment with baking soda and vinegar, you can achieve a similar reaction with baking powder and water (only it will take more baking powder to get the same effect).
Baking powder is typically made with about one third sodium bicarbonate and two thirds acid. That means if you were to substitute baking powder for baking soda in a recipe, you would need to use three times the amount called for to achieve the same amount of rise… which will likely have a not-so-good affect on the flavor of whatever you’re making, so I don’t recommend it.
Baking powders are generally labeled “double-acting” – meaning that part of the gasses are released when mixed with water, and the rest when exposed to heat. This means that a portion of the leavening happens in the oven. Recipes calling for baking powder (and not baking soda) can therefore be allowed to rest a little before baking without affecting the rise.
You can make your own baking powder mixture by combining 1 tsp. baking soda with 2 tsp. cream of tartar – this will make 1 TBSP of baking powder, and should be used immediately or it will lose its effectiveness. This is because the acids used in commercial baking powders are actually something called “acid salts” which do not react like an acid until they are dissolved in water. In other words, the sodium bicarbonate and acid salts play nice together until they get wet.
Keep in mind that homemade baking powder is only single-acting, meaning it will release all of its carbon dioxide as soon as it is mixed with liquid, therefore the batter should be baked immediately for best results.
Baking powder and baking soda will both lose their potency over time, especially if they’re kept in warm or humid conditions, or aren’t properly sealed. It is recommended that they be replaced every six months or so. Keep this in mind when using boxed mixes, such as Biscuick, as well. If the leavening agent has gone bad, you’ll be baking bricks instead of biscuits!
There’s also another, lesser-known chemical leavener, called Baking Ammonia. It is typically only used in smaller baked goods that are baked until completely dry, to ensure that all the ammonia gas has dissipated.
Yeast
(micro-organisms)

Yeast is the oldest form of leavening, dating back over five thousand years to the Egyptians, who used it to make their breads. Back then, it was thought to be a miracle. Fast forward a couple thousand years to the mid 1800’s, when Louis Pasteur (commonly known as the inventor of pasteurization) discovered the process of fermentation.
What is fermentation? Simply put, it is the breaking down of sugars and converting them into a variety of gasses and other compounds (like alcohol). For this to happen, there must be something acting upon the sugars, and that something is yeast. Yeast is made up of many tiny, single-celled organisms. Unlike chemical leaveners like baking soda or powder, yeast is quite literally alive. These organisms, like any living thing, need food… preferably sweet, sugary food! When mixed with sugars (like sucrose or maltose) yeast begins chowing down, breaking the complex sugars (disaccharides) into simple sugars (monosaccharides), and then converting them into carbon dioxide and alcohol. In fermenting wine, the carbon dioxide escapes into the air, but the alcohol remains. In baking, the carbon dioxide creates little bubbles and pockets within a dough, which then expand when exposed to heat. During baking, the alcohol evaporates.
Here Pacman demonstrates how yeast fermentation works. Sorta.

That’s right – yeast are tiny little beings, who’s sole purpose in life is to eat, and then, well… do that thing that comes after eating. But their gasses, unlike ours, are highly useful… not to mention tasty! Without yeast, the simple loaf of bread would likely never have developed into what it is today.
There are several different types of yeast out there. The common ones we find on the shelves of the grocery store are “Active Dry Yeast” and “Instant Dry Yeast” (also called quick-rise or rapid-rise yeast). I explain the differences of the two below. There are also “fresh yeast” and “wild yeast”. Fresh yeast is preferred by professional bakers, but is highly perishable and therefore less useful to home cooks. Wild yeast refers to the naturally occurring yeast organisms that live on the skins of fruits and berries (used to make wine), and in whole grain flours (used to make bread). By creating a healthy environment for the yeast (by mixing natural whole grain flour with warm water) the yeast begin to grow and multiply, feeding off the sugar and starches within the flour. This mixture can be kept alive by ‘feeding’ it with more flour from time to time, and is known as a sourdough starter. As the name suggests, it is added to bread recipes to create, you guessed it, sourdough! I actually made my own sourdough started back at the beginning of this blog, and you can find that post here: Jam and Sourdough
Active Dry Yeast and Instant Dry Yeast are nearly identical in appearance, but they actually work quite differently. I’ve scratched my head plenty of times over recipes calling for one or the other, or even worse not specifying which. With a better understanding of their uses, hopefully that won’t be an issue!
Active Dry Yeast – is dry and granular, and needs to be rehydrated in warm water (110° F) before use. Often times a recipe will call for a small portion of the water or milk to be heated with a small amount of sugar, and mixed with the yeast until frothy and bubbly on the surface – this is a sign that the yeast is active and ready to use.
Yeast is often used in recipes that need time to rise and rest in a warm place. While the microrganisms do they’re thing, they also add a unique depth and flavor, which becomes more pronounced the longer the dough proofs.
Because of the harshness of the drying process, about 25% of the yeast cells in active dry yeast are dead. For this reason it is less popular with professional bakers, who prefer to use fresh yeast (which must be kept refrigerated and is highly perishable, making it less useful for home cooks).
Instant Dry Yeast – also called quick-rise, or rapid-rise, yeast, is also dry and granular, but unlike active dry yeast it does not have to be dissolved in water before use. It can be added directly to the dry ingredients because it absorbs water much more quickly than other yeast, and will activate as the dough is being mixed.
Also unlike active dry yeast, instant yeast contains very few dead yeast cells, which means less of it is needed in a recipe (about 75% as much instant yeast is needed). Instant yeast also produces more gas, and faster, than regular dry yeast – this makes it great for short fermentations or “five-minute” bread doughs, but not very ideal for recipes that require longer fermentation or proofing. If used in a dough with a longer rise time, instant yeast may result in over fermentation. Over-fermented doughs will tend to collapse back on themselves, and become gloppy and shapeless as the yeast begin to multiply and break down the structure of the dough, effectively turning it into a starter.
Because yeast is a living organism, it is very temperature sensitive. In cold conditions the yeast is inactive, and in warmer ones it wakes up and begins to react. At around 140° F, yeast dies. When a recipe calls for active dry yeast to be mixed with warm water or milk, the temperature should be no greater than 110° F.
______________________
Alright, class – what have we learned today? We learned that Pacman farts CO2, and that bubbles are fun to photograph… oh, and we learned the difference between Baking Soda and Baking Powder, and Active Yeast and Instant Yeast! We also got distracted part way through learning about things and started watching youtube videos, which led to this video demonstrating the sheer explosive power of baking powder when mixed with water: Baking Powder Experiments (click to view). Yay, internet!
LIKE IT? SPREAD THE WORD: 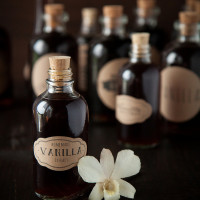 Everything You Need To Know To Make Sushi At Home! If I could choose one food to eat for the...