Show of hands – who watches cooking competition shows? It’s one of my big-time guilty pleasures. I sit under a pile of blankets, with a big bowl (who am I kidding, entire tub) of ice cream, and I talk at the TV the whole time. Plate your food, you’re running out of time!

I hate to admit it. Especially that last part, because talking at the television is, generally, a pet peeve of mine. But there you have it… the real me, pajamas, ice cream, tv-talking and all.

This “tiramisu” was inspired by (or stolen from…) watching Iron Chef America, Battle Gingerbread. In the Holiday Battle, it was not only mandatory to use gingerbread in each dish, but also to integrate eggnog in some way. In the episode, Nadia G. of Bitchin’ Kitchen created a gingerbread and eggnog tiramisu, and I thought, I wonder if that would be good?

Given, I think that a lot when watching cooking shows… but this one stuck with me, and with a little eggnog leftover from making my Eggnog Cupcakes (click for recipe) I was pretty determined to give it a try. Taking a cue from another Food Network show, I decided to go ahead and do things ‘semi-homemade’.

All the ingredients you’ll need

I went out to buy pre-made gingerbread cookies, and discovered that the closest thing available were good ol’ fashioned gingersnap cookies. I used these in place of cake or lady fingers, breaking them up and mixing with a little coffee and rum – it wouldn’t be tiramisu without the caffeine and liquor!
Then I made my mascarpone cream mixture with a little eggnog, vanilla, and nutmeg. Real tiramisu, like this one (click for recipe), is traditionally made with eggs, but since I was making it easy I left them out.
To top everything off, instead of the dusting of cocoa powder, or chocolate shavings, I crumbled a few extra cookies over the top.

The end result? These were, kind of surprisingly, delicious! The spice of the gingersnaps, along with the coffee, helped to balance the cloying sweetness of the eggnog. Don’t be fooled, though, this stuff is really rich… a little goes a long way, and I found myself wishing I’d only filled the cups half-way. For the holidays, though, this would make a fine little dessert. In moderation, of course!

Recipe Notes: Tiramisu is Italian for ‘little pick-me-up’ –  but add a little more rum and they might become ‘knock-me-outs’! If you’d like to serve these for all ages, substitute the alcohol for a few drops of rum flavoring.

Method
In a bowl, mix together the mascarpone cheese and eggnog. Set aside.
In a separate bowl, beat the heavy cream, sugar, nutmeg, and vanilla to stiff peaks. Fold into the mascarpone  /eggnog mixture, and set in the fridge to chill while making the rest of the tiramisu.
Stir together the coffee and rum. Break the ginger cookies into small to medium sized chunks, and place in a bowl. Add the coffee/rum mixture, and stir with a spoon to combine. Things will get a little mushy, but that’s okay.
Layer in parfait glasses or cups – one spoonful of the cookie mixture, then a dollop of the chilled cream mixture. Repeat. Garnish with crushed up ginger cookies, and set in the fridge for at least 30-40 minutes before serving. (Can be made up to a couple hours in advance, or even the day before, but I found that after sitting overnight they became quite dense.) 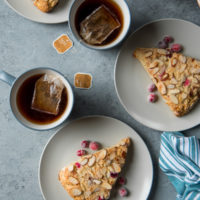 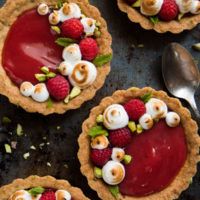 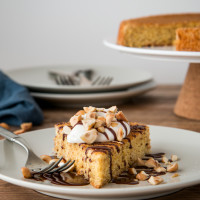 Holiday Gifting Made Easy – These are a few of My Favorite Things
Food Photography for Bloggers, and a Christmas Recap

Brown Paper Packages Tied Up With String...T'was the week before Christmas, and all through the house, not a creature was...