What are these ‘super foods’ I keep hearing about? I’m beginning to think the whole fad of “super” this, and “super” that has all gotten a little out of control. Yeah, some foods are pretty dang awesome – nutritionally as well as tastily – but aren’t all foods technically “super”? I mean, think about it. How amazing is it that when we eat a potato, our bodies break it down into sugars, proteins, and over twenty different vitamins and minerals. How incredible is it that we can, and have, lived off virtually nothing else? So why isn’t the potato a super food?
Now it seems like the label is slapped onto just about anything foreign or unusual to us – a fruit or berry that’s been shipped in from the other side of the world. And while the nutritional information may be baffling, is it really so much more “super” than, say, a banana?
I’m not debating that there are certainly some foods more super than others – I’m just saying we’ve gotten a little hasty with it, is all.

All ranting aside, though… this salad is pretty super. Comprised of one of my favorite so-called super foods, Quinoa. Probably one of the most under-appreciated ones out there, but with it’s popularity growing I thought I would share another, perhaps less familiar, way to prepare it – raw.

Raw diets are nothing new. The basic idea behind them is that foods contains many nutrients, as well as the things our bodies need to digest and utilize these nutrients – but that cooking often times destroys many of the necessary, naturally occurring, compounds. That means we get significantly less of the things we need, and that much of what we do get has been compromised.
To a certain extent I agree with this – think about steamed vegetables, for instance, and how quickly the color drains from them and the water becomes rich like broth. Whatever’s being left behind in that water isn’t going into our tummies anymore, it’s going down the drain. And it isn’t hard to imagine the vitamins and proteins breaking down and deteriorating when heat is applied.
Of course, some foods require cooking – cannot be eaten without it – to remove poisons, toxins, or to make them otherwise suitable for digestion – but being raw isn’t as limiting as it sounds. Many foods that can’t be digested in their normal state can be sprouted – including most beans, grains, and seeds.
I went raw/vegan for a time, and was happily surprised by all the options available to me. I never got bored – in fact, just the opposite. I was continuously discovering new and exciting ways to use food, while keeping it raw.

Of course, I’m neither raw nor vegan for now, but whether or not you’re interested in being ‘raw’, it never hurts to keep some whole, unadulterated foods in your diet. So long as their delicious, that is!

First – how to sprout quinoa!

If you have a sprouter, you can follow the instructions provided with it. Otherwise, this method has worked for me every time.
This will make approx. 2 cups of sprouts, enough for one batch of salad, and takes a couple days (pretty fast, for sprouting!)

In a bowl of other container, combine 1 1/4 cups dry quinoa with enough water to thoroughly cover. Give the quinoa a swirl to make sure the water has reached everything. Let this sit for 10-12 hours, or overnight, at room temperature.
Thoroughly rinse the quinoa through a cheesecloth or other very fine strainer with cool water.
Line a baking sheet with paper towels, and spread the quinoa evenly across it.
Cover with another layer of paper towels, and let the quinoa sit at room temperature for 6-8 hours.
Uncover the quinoa and rinse again through a fine strainer. Return to the paper towel covered tray, cover, and let sit for another 6-8 hours.
Continue this, rinsing every 6-8 hours, until the sprouts are as long as you’d like them. I like to keep them short, and it usually only takes 2-3 rinse cycles. After your final rinse, keep the quinoa uncovered to help it dry out. The drier it is, the better it will store in the fridge. Sprouted quinoa should last several days in a chilled, sealed container.

(This is about how long I like my sprouts, but you can sprout for a couple more rinse cycles if you like.)

2 cups sprouted quinoa (about 1 1/4 cups dry)
2 TBSP ground flax seed meal
1/2 cup sliced or slivered almonds – or other nuts, if you like
1/2 cup fresh fruit – I used kumquats, but fresh apple, pear, or other sweet citrus would work well
1/4 cup dried fruit – I used Goji berries to keep with the ‘super food’ theme, but cranberries or raisins would be delicious
1/4 cup raw seeds – I used sunflower (or you could use sprouted sunflower seeds)
1/2 cup fresh leafy greens – I chose kale, though rainbow chard or spinach would be nice
1/4 tsp. salt
1/4 tsp. powdered ginger
1/8th tsp. garlic
1/8th tsp. cayenne (optional)

(Clearly, you can feel free to use whatever you’d like in this salad. Use the amounts as a guide, but feel free to change up the fruit, nuts, seeds, and even the spices to whatever appeals.)
Method:

Toss all ingredients to combine, and enjoy! Store any extra in a sealed container in the fridge for up to a few days.

Of course, you could make the same salad with cooked quinoa, toasted almonds, roasted sunflower seeds, and sauteed greens… but why would you? Complete protein, full nutrients, and delicious flavor. All of the things the body needs! 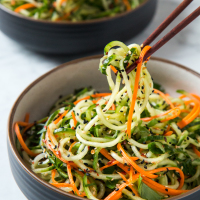 Sometimes, I'm a genius. The think machine starts firing, and before I even know what's hit me I've had a...