See that? It’s lushous. It’s fudgy. It’s delicious. It took me three tries to get right.

Now I have eaten so much peanut butter fudge, I think I have a fudge baby inside me. I need a fudge-bortion. I know I shouldn’t joke about such a serious subject, but unless doctors can master the appendec-tummy (in which they remove your appendix and replace it with a second stomach) I don’t have many options left.

This all started about a week ago, when The Boyfriend mentioned Buckeye candies – round balls of peanut butter fudge covered in chocolate. Ever since then my heart has been set on peanut butter fudge, and of course, chocolate – whether it be dipped in, drizzled on, or swirled throughout.
So the quest for recipes began.

The first recipe I tried called for 50/50 peanut butter and butter, a pinch of salt and some vanilla extract, and over 4.5 cups of powdered sugar (holy crap!) – following the recipe, I melted the peanut butter and butter in a pot on the stove, brought it just to a boil, then removed it from the heat and added the rest of the ingredients, stirring until smooth and spreading out in a parchment lined and greased baking dish. After removing from the dish I drizzled melted chocolate over the top (I didn’t bother to make a ganache, although that would have helped the chocolate to adhere to the fudge better). I was hopeful as I began to cut the fudge into squares, but the result was less than what I had expected. Although tasty, it was overly sweet and dry, breaking apart and crumbling rather than holding any kind of ‘fudgy’ consistency. It also wasn’t as peanut-buttery as I felt it should be. All of this, I assumed, was caused by the amount of powdered sugar.

Batch number one – this was good, but not quite what I was looking for. It was a large batch, though, and was thoroughly enjoyed by many friends.

The second recipe was the only one I found which called for granulated sugar, rather than powdered, and whole milk – both of these things I thought might help the dryness factor. However, it called for 3 cups of sugar to only 1/4 cup of peanut butter… this had me skeptical from the start. Still, I was careful to follow the recipe, as it claimed to produce a soft and peanutty fudge.
I stirred the sugar, milk, and peanut butter together in a sauce pan and brought it to a boil on high, then reduced the heat to medium and simmered for twenty minutes. In the first five minutes it foamed up, and I stirred constantly. After ten minutes it began to thicken, and I started to think this might just do the trick. At twenty minutes I killed the heat and stirred in the butter and vanilla extract, as the directions indicated. The mixture began to seize up when I did this, but was still, just barely, loose enough to press into my prepared baking dish.
This recipe turned out even dryer than the first, more like maple-brittle consistency than fudge. And again, although tasty, it was too sweet and not peanut-buttery enough.

Recipe number two: doesn’t even deserve to be called ‘fudge’.

Alright, so now things were getting serious. I did what I should have done the first time, and looked up what Alton Brown had to say on the matter. His recipe seemed somewhat similar to the first I had tried, but with less powdered sugar, and done in the microwave. Thanks to the many people who love Alton Brown, there were many comments and reviews of his recipe, and some suggested an even further reduction in the powdered sugar, and slightly different microwave times. I took some of the tweaks and alterations into consideration before making the following recipe.
My other thought, which I wasn’t finding any answers to, was if the peanut butter itself would make a difference. The first recipe I tried, I used a natural organic peanut butter. The second recipe, I used a different natural peanut butter which was ‘no-stir’. Now, as I became more and more frustrated, I decided to go out and buy a jar of Jiff, figuring if anything would make a creamy fudge, the partially-hydrogenated, sugar-filled generic would be it.
I should note, here, that somewhere between the store and home nearly half the jar of Jiff disappeared… into my stomach. Ignoring the fact that I keep a plastic spoon in my glove compartment, and probably should get some kind of therapy, I can’t help but wonder if they mix a bit of crack into that stuff. In the middle of maybe my tenth spoonful, I paused to think: ‘wait, why am I trying to make fudge when I can just eat it straight from the jar?’
I’m almost ashamed to say these things, because I love natural, organic, grind-your-own-if-you-can peanut butter. I was raised on Smucker’s, and one of my favorites is MaraNatha. Apparently, however, I find Jiff irresistible. Again, I’m sticking with the cocaine theory. It’s too addictive to be a good thing.

Back to the third recipe.

Peanut-Butter Fudge, with a chocolate swirl
(Adapted from Alton Brown)

1 Cup peanut butter (creamy or chunky, I used creamy)
1.5 sticks butter
1 tsp vanilla extract
3 cups powdered sugar (loosely measured, you don’t have to pack it down or anything)

Method:
Cut butter into pats, and put in a large microwave-safe bowl with the peanut butter. Microwave on high for a minute and thirty seconds, stir, then microwave again for another 1.5 minutes.
Stir again, adding in the vanilla extract first and then the powdered sugar. It’ll become difficult to stir, but will get a little easier as the sugar incorporates.
Once all the powdered sugar is in, pour in the chocolate chips and give it just a few good stirs – the less you stir the more marbled an effect you’ll have.
Pour/dump into an 8×8 inch baking pan, lined with parchment paper (overhanging the edge so you can just lift the fudge out once it’s cooled) and greased with butter on top of the parchment. Smooth the fudge to the edges with either a rubber spatula, or by pressing down on the top through another sheet of parchment. (I learned later it would be useful to bang the pan against the counter a few times to knock out some of the air bubbles).
Cover and refrigerate until solid, about one hour. Remove from pan and cut as desired.

This turned out fantastically – it was smooth, it was fudgy, it tasted like peanut butter cups from heaven. So good that even after gorging myself on peanut butter while making it, I still couldn’t resist eating it. (Body, please forgive me for the things I do to you…)

This was the winner. I’d be tempted, in the future, to reduce the amount of sugar even more (perhaps all the way to 2 cups), however, I would warn that it may not solidify if there isn’t enough. As it is, the fudge will hold its consistency at room temp., but should be kept refrigerated for the most part. If it’s in a sealed container, it should last for about a week.

I still had questions, though. Would it work with an all natural peanut butter? And would it still be fudgy if I omitted the chocolate? I had to know.
On to the fourth batch!

This time I used all natural Smucker’s brand peanut butter – nothin’ but peanuts and salt – and no chocolate.
I microwaved the peanut butter and butter, added the vanilla and powdered sugar, stirred it all together and poured it into a prepared pan. This time, having learned a little from before, I spread the fudge roughly to the edges, then tapped the pan flat and hard against the counter 6-7 times to remove air bubbles before smoothing the surface carefully with a spatula (this really did help the end result).
I put it in the fridge, and a couple hours later when I took it out to slice was pleasantly greeted by creamy peanutty fudge. It sliced even better than the batch with the chocolate (probably because of banging out the air bubbles) and tasted divine.

Needless to say, I was pleased with myself. Not only had I found a recipe that would work, but it was also one of the easiest things in the world to make. About five minutes total, between microwaving and stirring, and the rest is chill time. It was a struggle to find what worked, but the results are absolutely worth it.

Now I just need to find people to pawn the stuff off on before my stomach explodes.

“We should count ourselves lucky to complain only of full stomachs, not empty ones.” 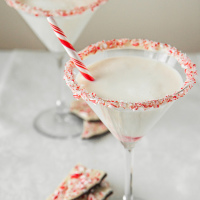 9 Responses to Peanut Butter Fudge – a comparison of recipes (the easiest one is the best!)

If you live in Ann Arbor, you probably know the place I'm talking about - on State St., just North...