Spring is here! I know because it was warm – then it snowed – then it got into the mid sixtees, and the birds were singing – then it poured. Oh, and my alarm woke me up an hour before I was ready to get out of bed. What’s up with that? Also, the clock in my car is finally right… that’s going to take some getting used to.

But Spring is here! I went disc golfing and my fingers didn’t get frost bitten! I napped on the back deck like a cat in a patch of sunlight! I turned my first shovels full of dirt in the garden! I began complaining that it was too hot!

It’s hard to believe that just days ago it was cold, windy, and bitter. The weather was bad, and I was under it, playing limbo with the thermostat.

Seeing this, The Boyfriend took it upon himself to make me a pot of soup. Not just soup, though. The best, heartiest, most feel-good lentil soup I’d ever tasted. I’m not sure which made me happier – the soup, or who had made it for me.

That night we sat on the couch, curled under the blankets and ‘mmm’ing over our bowls.

As if things could get any better, as we put the leftovers away he turned to me and asked “what should our next soup be?”

Those are the words every girl wants to hear, right?

Well, here it is: our next soup! I realize that I will always be tempted to call any fresh, homemade soup ‘the best’ of it’s kind, but this truly is the most delicious beef barley soup I’ve ever had. Perhaps because of the collaboration of love that created it. Or because The Boyfriend spoils me, and insisted on steak intead of stew meat.

Either way (and whichever cut of meat you choose) I can assure you that this soup will not disappoint.

In a large dutch oven or heavy bottomed pot, heat the oil over medium-high heat.
Cube all of the meat and toss with a heafty pinch of salt and pepper. Add meat to the hot oil one batch at a time – you don’t want to over-crowd the bottom of the pan, or else the meat will steam itself instead of searing.
Sear the beef until well browned, about 2-3 minutes. Remove from the pan, and repeat with another batch of meat. Continue until all of the meat is browned. Set aside.
To the pot, add the onion, garlic, and carrots. Saute 1-2 minutes, then pour in the alcohol to deglace the bottom of the pan.
Return the meat to the pot, add the rest of the vegetables (and all of the herbs if using dried). Pour in the stock and boillion, stir to combine, and bring to a boil.
Reduce heat to a simmer, cover, and let cook 45 minutes.
Uncover, stir in the barley, and let cook for another 30-45 minutes, or until the barley is tender. If the soup is to thick for your liking, add a little stock or water.
If you’re using fresh herbs, stir them in at the end of cooking. Season with salt/pepper to taste.

Garnish with more fresh herbs, serve with a slice of rustic bread, and enjoy!

So… what will our next soup be? Let me know in the comments what your favorite soup is! 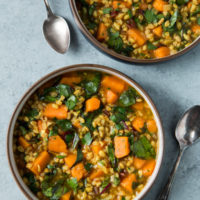 40 Responses to Beef Barley Soup for the Soul

(Chocolate Stout Cupcakes with Jameson Ganache and Bailey's Buttercream- recipe in post)Whenever I start to think about making cupcakes, I...