“The first fall of snow is not only an event, it is a magical event. You go to bed in one kind of world and wake up in another quite different, and if this is not enchantment, where is it to be found?” – J.B. Priestly

Ah, a winter wonderland if I ever saw one.

Last week marked the biggest snowfall I can remember in my lifetime. Over sixteen inches of it, on top of the half foot of snow already on the ground. We’re talking fall-in-up-to-your-knees deep. I shoveled the driveway four times in one day just to keep up with it… and I didn’t keep up with it.

That mound of snow on the left of our porch? That’s Neko’s dog house.

It wasn’t only snowy, though… it was also cold. So cold that 0 degrees F started to feel balmy. So cold that my facebook feed filled with tales of water lines breaking and houses getting flooded. So cold that the news reporters started using fruit to demonstrate just how freakin’ cold it was. If you don’t know what I’m talking about, watch this video.

None of this should come as much news, seeing as this cold snap enveloped almost the entire country in its frosty grip. That photo above should look pretty familiar to anyone who tried to go outside. But despite those bitter, freezing temperatures, I still managed to have more fun in the snow than I’ve had since I was a kid.

I’m pretty sure I got frostbite taking these photos, but it was so worth it… 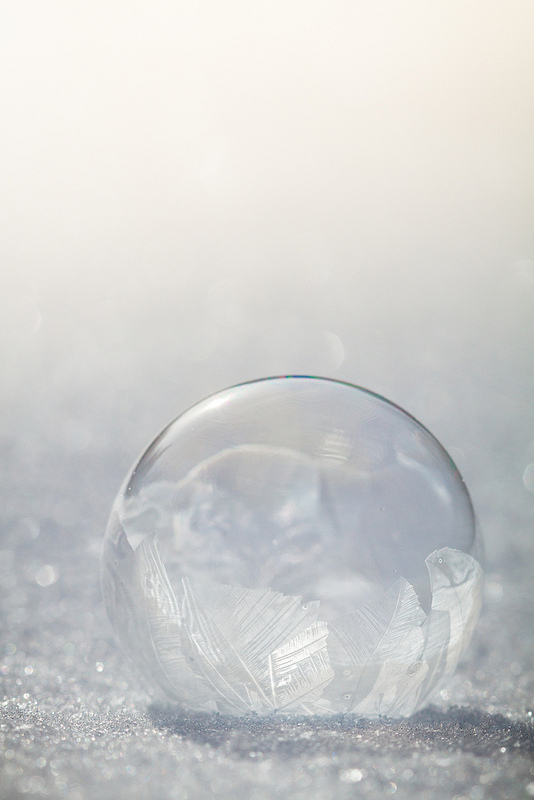 The first thing I did when the temperature went below zero was mix up some soap to blow bubbles. I was inspired by these photos, and had so much fun watching them slowly freeze from the bottom up. Unfortunately it was a little windy, and a lot of my bubbles didn’t last long enough to photograph. (Pro tip: mix a little glycerin or corn syrup into your bubble mix to make them a bit stronger.)

I also discovered that Neko is a HUGE fan of bubbles. Just one more reason they didn’t last long enough to get pictures of. 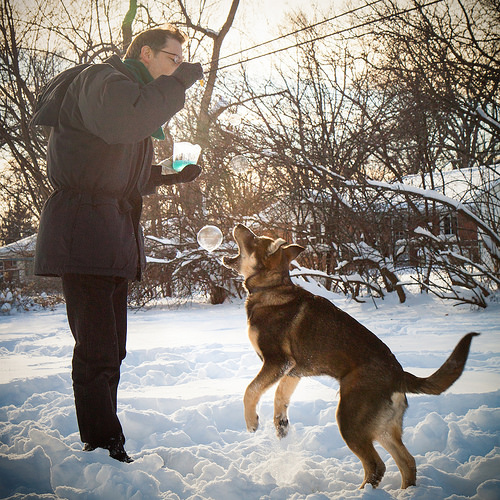 He never ceases to entertain me. I call that last one, “appetizer, entree, and dessert.” The look on his face is priceless! Now I just need to figure out how to make bacon flavored bubbles…

While I was busy relearning how much fun it is to blow bubbles, it started to snow… again. Not the ongoing, ever-accumulating kind we had already experienced, but the lightest little flutter of flakes, which landed themselves delicately on my car (which I had recently cleared off), and since the temperature was so low, they stayed, perfectly formed, exactly where they landed.

Taking pictures of snowflakes reminded me of the incredible work of this photographer. Attempting to capture them on camera gave me a new-found appreciation for what he does. If you like extremely detailed photos of these intricate little ice-sculptures, I highly recommend you check out his work, here. (Or, equally impressive, this photographer’s work.)

While I was in the market for fun things to do in the cold, I couldn’t help but notice a popular trend going around the internet of people throwing cupfuls of boiling water into the air, and watching the water freeze instantly and rain down as fresh snow. I had to get in on that action! I didn’t take any pictures of this happening, but you can find a video of the experiment here.

This reminded me of a phenomenon known as the Mpemba Effect — that is, the observation that in some cases, hot water freezes faster than cold. In the case of turning water into snow, the primary culprit is the rapid evaporation of steam, but it can also happen in many controlled environments, like freezing ice cubes. It’s been a scientific head-scratcher for centuries, ever since it was first noticed by Aristotle, and while there are plenty of theories as to why it happens, no one is entirely sure.

Speaking of barely understood science, snowflakes are pretty magical as well. To think that trillions upon trillions of little water molecules might gather in the clouds, and freeze in near perfect symmetry to one another before falling to the ground… each one a uniquely formed crystalline structure, with more facets than the most expensive diamond. I could’ve stood there admiring them all day, if I weren’t losing feeling in my fingers and toes.

Of course, we all know the best way to warm up and contemplate the finer things is life is with a piping hot cup of cocoa. Which is exactly what I did. If you ever find yourself snowed in for a while, I highly recommend making yourself a big ol’ batch of these chocolate dipped orange zest marshmallows. Homemade marshmallows are a serious game changer, and just another one of life’s wonders. Just like snowflakes, each one is beautiful and unique. Well… they’re tasty, at least. Plus you get to eat them like this:

All in all, I think this was one of the best snow days I’ve ever had. When I was a kid, it was sledding and snowball fights… now, it’s bubble blowing and cocoa sipping.

What about you — what’s your favorite thing to do on a snow day?

Before and After – 6 Months of Puppyhood

Happy New Year! The past couple months have been crazy with all the holidays, and I gotta say, I'm glad...