Let’s talk football. Actually, let’s not talk football. Let’s talk football food. The super bowl is coming up, which is something I am definitely looking forward to. Not because I like sports (yes, sadly, I am one of those people who watches for the commercials, not for the game), but because it means food. Awesome, amped-up, bite-sized, eat-with-your-fingers, unapologetic deliciousness.

Hunky men in tight pants is just a bonus.

It’s true. If you invite me to your super bowl party, I will not know who we are rooting for or why. If you ask me a sports-related question, I will promptly stuff my face with something tasty and grunt an apology for having my mouth full and not being able to answer. But you should invite me to your party anyway, because I’ll bring these — which will save you the minimal effort required to make them. Worth it? Yes.

The only problem with all the food around football season is, well, all the food. Didn’t we all just make a bunch of diet related resolutions? If I’m not mistaken, most super bowl worthy snacks aren’t exactly the healthiest things to be eating in quantity.

That’s why I’ve attempted to healthify these jalapeno poppers, without sacrificing any of their awesomeness, by baking them instead of frying. You know, so you can eat a dozen of them and still have enough energy to stand up and cheer when your team scores a touchdown. Or, when everyone else stands up and cheers and you just follow along because you don’t know what’s going on.

You could even make these bad boys a touch lighter by using low fat cream cheese, if that’s your thing (I’m a full-fat dairy kind o’ girl, but to each their own). They can also be made gluten-free, just by swapping the flour and breadcrumbs for their gluten-free counterparts. Whatever sizzles your bacon. 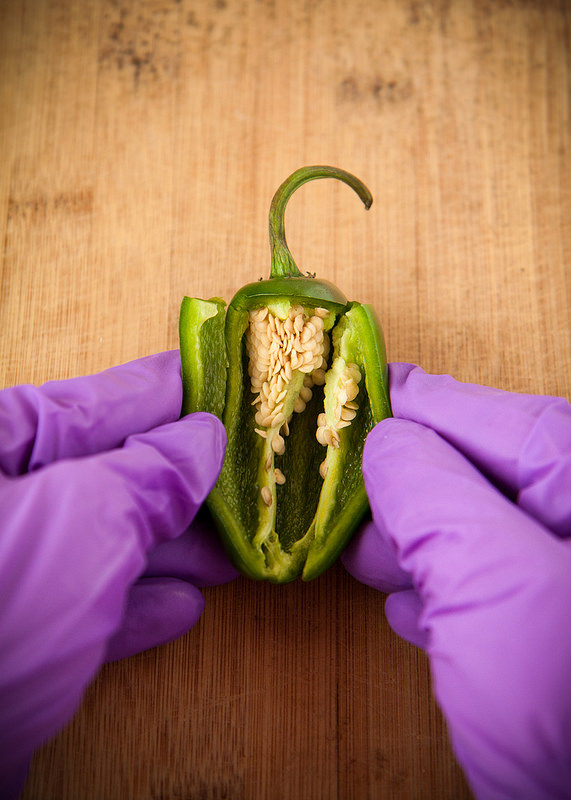 Before we get to the recipe, let’s take a look at the game plan. When you’re gutting the seeds out of these peppers, be sure you’re wearing gloves. I like the Nitrile kind, because they’re both latex and powder free, and they make you look like a culinary surgeon. The oils inside these peppers are hot, and handling them with your bare hands will result in jalapeno-degree burns wherever you touch yourself. Like your face. Don’t do it.

Second, there are two ways to go about filling your peppers. You can slice ’em in half, scrape out the innards, and fill each half separately (the easy way), or you can make an incision down one side, scoop out the seeds, and stuff the whole pepper (the awesome way). The first way is a bit faster, and will result in double the number of poppers (score!), but I prefer the second method simply because I like the look of the whole peppers, and the stems double as little handles for dipping (bonus!). Your poppers will be equally delicious whichever method you choose, so it’s up to you.

Lastly, feel free to customize the recipe to your tastes. Keep in mind that the bulk of the heat in the jalapenos is in the seeds and veins, so the more thorough you are in removing them, the milder they will be. You can also swap out the pepper jack cheese for monterray, cheddar, or mozzarella. I actually filled some of my peppers with a mix of refried beans and cheddar, and served them with salsa for dipping. Those turned out great, too, so use whatever you like. The one thing you shouldn’t change about this recipe is the breadcrumbs — whether you’re using gluten-free or regular breadcrumbs, be sure they’re panko. This will help give the poppers that perfectly crispy exterior, sans the deep-frying.

Alright? let’s do this!

Print
Author: Willow at Will Cook For Friends
Serves: Makes 14-16 whole poppers, or 28-32 half poppers
Ingredients
Instructions
Notes
These poppers can easily be made gluten-free, just by swapping the flour and breadcrumbs for their gluten-free counterparts. Whatever kind you use, just be sure the breadcrumbs are panko for that nice crispy exterior, sans the deep frying!
3.5.3208
This post contains an affiliate link. This means that if you follow a link to amazon.com and make a purchase, a small portion of your purchase goes to me, at no extra cost to you. I am not sponsored by any of the products I link to, they are just the items I personally use and would recommend. Your support helps make this blog possible – thank you!
LIKE IT? SPREAD THE WORD:

"The first fall of snow is not only an event, it is a magical event. You go to bed...