(Watermelon Salad – recipe in post)
Ah, Independence Day. Gunpowder in the air, children burning themselves with sparklers, and the wafting scent of neighbors firing up their grills… even though it’s so hot they could cook the burgers on the pavement. There’s nothing quite like it!
A couple years ago, a friend brought a salad very similar to this to a party. It consisted of watermelon, cucumber, and onions, dressed in a light vinaigrette. I was dumbfounded that anyone would put watermelon and onions into the same bowl together, but was curious enough to try it… and I could not stop eating it. Of the entire potluck, it was the only thing I kept coming back to again and again.
Remembering that dish, I asked my friends and family if they had the recipe. Before I knew it, a search party was out, trying to find where it was written. The longer I waited the more apparent it became that I wasn’t going to get the original, so I decided to take what I remembered and put my own spin on it.
While I loved that salad exactly how it was, I opted to swap the onions for Jicama, and the vinaigrette for fresh herbs and a squeeze of lime. The blueberries came as an afterthought, for the red-white-and-blue theme, but I have to say they were one of the best parts of this salad.
Crisp, cool, refreshing – perfect to bring to potlucks, barbeques, or just to sit in your underwear and munch on to stay cool. Not that I’m sitting in my underwear eating watermelon… I’m more sophisticated than that. 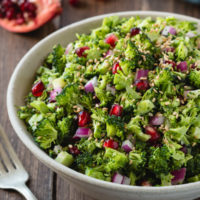 18 Responses to Watermelon Salad – Red, White, and Blue… and Green!

What's this? Drop cloths, ladders, and drywall dust on every surface of my house? Wait, where am I in all...