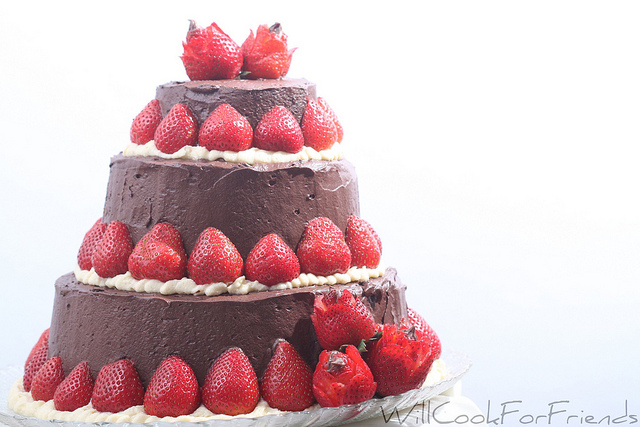 After days on end of grey and dreary, overcast and rainy, the sun finally emerged to brighten the skies when it was most desperately needed. Almost like summer, again.
Over the weekend, The Family celebrated The Sister’s wedding – a warm gathering of close family friends, and a small, but lovely, ceremony. I’ve never seen The Sister so happy and beaming, and am overjoyed for her sake.

I’d volunteered to photograph and cater most of the food for the event, as well as make the cake. Although it was small and cozy, only about twenty-five people, it was still more than I’d ever cooked for in the past. Turns out, putting food together for that many people can be a bit of a production. The night before I was up into the wee hours cooking soup, prepping chickens, and kneading bread. I took a nap while the dough rested, but was up an hour later to start baking. Thank goodness for coffee, tea, and those little energy shot drinks. 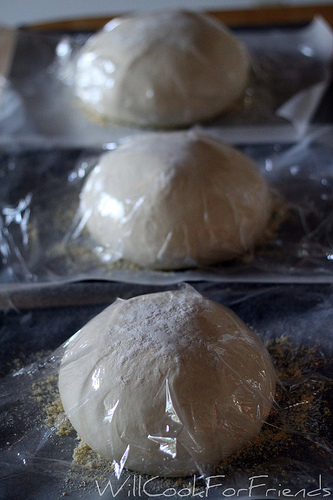 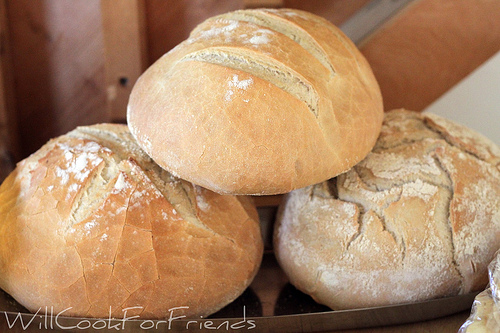 Somehow, while I had my internal struggle with the food prep. in the 48 hours leading up to the wedding, The Mother managed to make her end of things seem smooth and effortless.
She pulled together bouquets from the gardens, the last of summer’s colors, and strung little lights along railings and balconies (as it was a sunset wedding and people would be inside after dark). 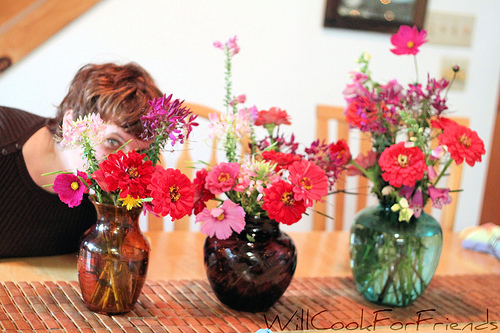 (The bride sneaks into a shot of the flowers the eve before the big day.)

Back on the kitchen side of things, I had a couple of saving graces – one, that the neighbor had offered the use of her (beautiful!) kitchen, and two, The Mother was there to cheer me on. Again, mom’s are pretty super.

On the chef list: The three loaves of sourdough, as seen above, made from my homemade starter.
I spent several days leading up to the wedding mutliplying my small starter into a bunch of big starters so I would have enough. Even though it had spent the past month or so in the fridge, only being fed from time to time, she’s stronger and more bubbly than ever. She rose the loaves to perfection.

A big pot of Green Bean Soup, which I played around with by using dried New Mexican red chiles and fresh Anaheim peppers in. I bumped up all the seasonings, and the flavors really came through.

(This was especially good with the sourdough!)

Three roasted chickens, which I prepped the night before. I actually made a mistake cooking them, accidentally setting the oven temperature for 350f. instead of 450f. – after cooking for forty minutes I checked them, only to find they had barely cooked at all. Once I figured out the problem, I bumped the temp. up to what it was supposed to be and cooked them for about another half hour, until the thigh meat came up to 170f. Carving into them, I found that the breast meat (normally the driest part of the bird) was so succulent and juicy you’d have thought it wasn’t white meat at all. What a happy mistake I had made! Everyone marveled at what a moist roast it was. 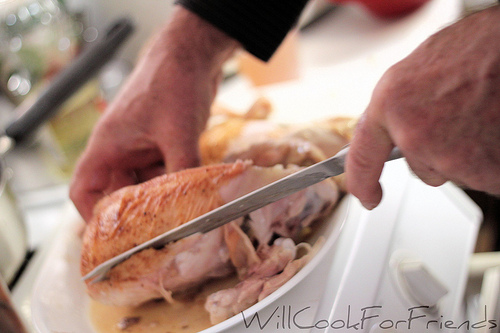 (One of the chicken’s getting carved up and plated.)

And of course the wedding cake.

(Again, more on this later.)

On top of the food I was making, The Sister prepared a chile sauce for bread-dipping, and some fried green tomatoes, fresh from the garden. 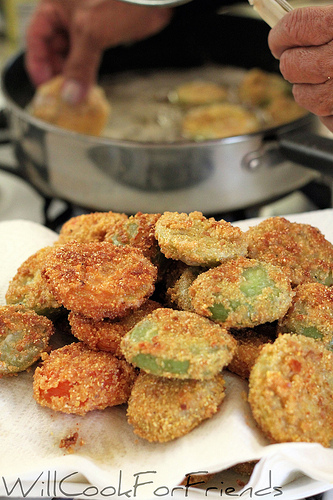 (Tomatoes getting fried up nice and crispy.)

She also arranged some beautiful bowls of fresh fruit, and garnished with more of my chocolate ganache-filled strawberries. 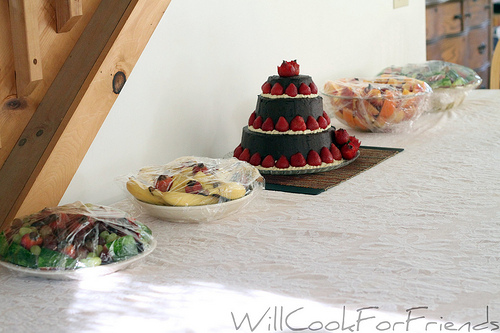 Not your traditional wedding fare, but a wonderful spread no less. The guests were happy, the family was happy, the happy couple was happy. Ah, soak it all up!

When the Sister asked me to make the cake for her wedding, my first question was, predictably, ‘what kind?’. She requested Angel Food, saying it didn’t have to be fancy, just tasty.
Of course, my mind went straight to the traditional three-tiered style cake, and once she gave me the creative go-ahead, that’s what my heart was set on. Unpractical, yes. Insane, probably also yes.

I’ll try not to go into all the details here, but I will say this: besides the box mix, I’d never made angel food before. My basic understanding of Angel Foods was decent, though – I already knew about beating egg whites, making meringues, and not greasing the pans – but I did my research, as well. I read dozens of recipes, and finally went with Alton Brown to begin with.
The first test cake? A flop. It sank in the oven and was dense and moist – tasty, but by no means Angel Food. I thought perhaps I hadn’t baked it long enough, which would be an easy enough fix.

The second test cake? Double flop. Same outcome, despite longer baking. The cake was dropping in the middle of baking.

On to more research! Reasons cake might fall in the oven? Too much leavening (baking powder, baking soda, etc.), too much shortening, too much sugar, too slow an oven, not enough flour… no, none of those things.
Aha! Over beating, perhaps? No, not the problem – I brushed up on my beating technique and ability to recognize soft/medium/stiff peaks. Besides which, I was using a recipe calling for medium peaks while many other recipes call to take it all the way to a stiff-peaked meringue.
Oven not hot enough? Nope – double and triple checked the oven thermometer.
Too much liquid? Ooooh – I did think it was strange that all of the recipes called for ’12 egg whites’ when the size of egg whites can vary so drastically! Finally I found a few recipes that specify “1 1/2 cups” egg whites – this was a full half cup less than one dozen. Strange how no one thought to mention that, especially when store-bought whites specifically measure twelve eggs worth as two cups. Discovering this, I thought my problems were all behind me. I’d figured it out, I was a genius, someone put my name on a plaque.

Certain I’d solved all the mysteries of the angel food, I went ahead with my next test cake. I used the recipe in The Joy of Cooking, and this time used the proper number of egg whites. This turned out significantly better – still not perfect, airy angel food, but close.

Next was to test the smaller cake pans, as I had three sizes and needed to know how the little ones would bake. Now that I knew the right number of egg whites to use, I went back to Alton’s recipe, which was a big mistake to try an unsure recipe with the new pans. Sure enough, something went wrong and the cakes dropped in the oven – was it the pans? Was it the recipe? Could Alton Brown really have failed me? Was I going to throw a fit? I knew the answer to one of those questions.

Part of me wishes I had more photos of the failed cakes to show you, but as you can imagine I was getting extremely frustrated, and the last thing I wanted was to document my repeated shortcomings.
I think I’m pretty good in the kitchen – good at researching, understanding, and executing recipes. If something doesn’t turn out the first time, I generally can see what went wrong and fix it. No biggie. Failing over, and over, and over… and over and over, again… is just not my style.

One thing I learned about fallen cakes: this is the difference between the egg whites being slightly chilled (on the left) and room temp. like they should be (on the right).

Unfortunately I didn’t have much time leading up to the wedding, and although I made six test cakes I still didn’t feel ready.
I’d done plenty of research, both online and talking to local bakers and bake-shop owners. I’d even consulted with The Boyfriend’s Brother, who made a six-cake mountain of angel food for the last family birthday celebration:

“I made an extra cake for structural support.”

Aren’t his Angel Food’s lovely? He confirmed that he took the batter to a meringue, and that using cartoned egg whites would work fine.

I took all my information and trial-and-error wisdom into the kitchen with me the day before the wedding, and made four cakes, passable as angel food but not quite up to the (perhaps high? sometimes…) standards I set for myself. They would have to due.

(These three were for the big cake, and  I made one extra in case the main cake wasn’t enough.)

Next came the stacking. There would be no way, with the addition of frosting and strawberries, that the cakes would be able to support each other’s weight, so I constructed a kind of cake stand for them using a few simple things I found at cake supply stores.
While most cake supports rely on dowels going through the cake itself, here I had to use just one dowel through the tube-cake center. I used a few cardboard cake separators, each cut to just under the size of the cake to be sitting atop it, and one hollow plastic dowel rod through the middle.
I cut circles out of the middle of the separator discs just barely wide enough for the dowel to fit through – this tight fit turned out to be enough for each disc to support the layer of cake it would hold. It also meant, that because I wasn’t securing it in any other way, that once the first layer of cake was cut I could easily slide the separator off the center dowel and begin slicing the next layer.

Here’s the cake before being decorated, and you can see some of my structural supports: 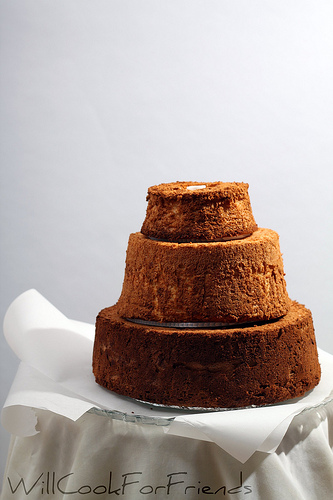 Yay! The cakes were together. The cake sizes were a standard 10” Angel Food, a 7”, and a 4.5” – I ordered the smaller ones online, but later found them at bakery shops.

Then came the frosting – finally, the fun part! The recipes I used are in my post Blue Jeans and Buttercream; a dark chocolate whipped cream frosting for the body of the cake, and a not-too-sweet vanilla buttercream piped around the base of each tier.
These frostings were so good, people were literally taking dollops of the extra onto their plates long after the cake was gone. Good thing I made so much!

Atop the cake, and at the base, were strawberries I carved to look like roses, and then piped full of chocolate ganache.

(Look! I made kissy lips! Did I mention I didn’t get enough sleep?)

The ganache was a simple, maybe 60/40 ratio of chocolate and heavy cream, which I let cool slightly and then whipped for easier piping.

The cutting of the cake, as is tradition:

The disappearing of the cake, again, as is tradition: 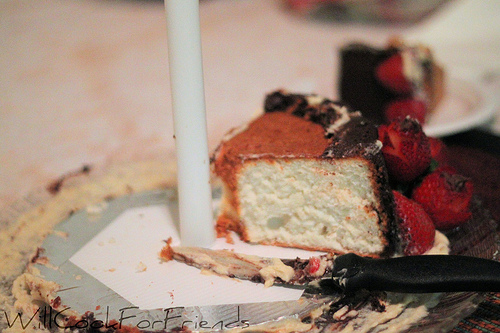 All of the food went over very well, and got rave reviews from the attendees. Compliments were flying, and I was pleased.

But the evening wasn’t about the food, of course, it was about the people – the friends, the family, and most importantly the two people joining their lives together.

What a beautiful thing, and what better way to celebrate, than with cake.

Oven Roasted Chicken – so easy, so delicious
Pumpkin Puree two ways – and neither are from a can

Roasted chicken is probably the simplest meal there is for impressing guests. It's economical, elegant, delicious, and looks like a...