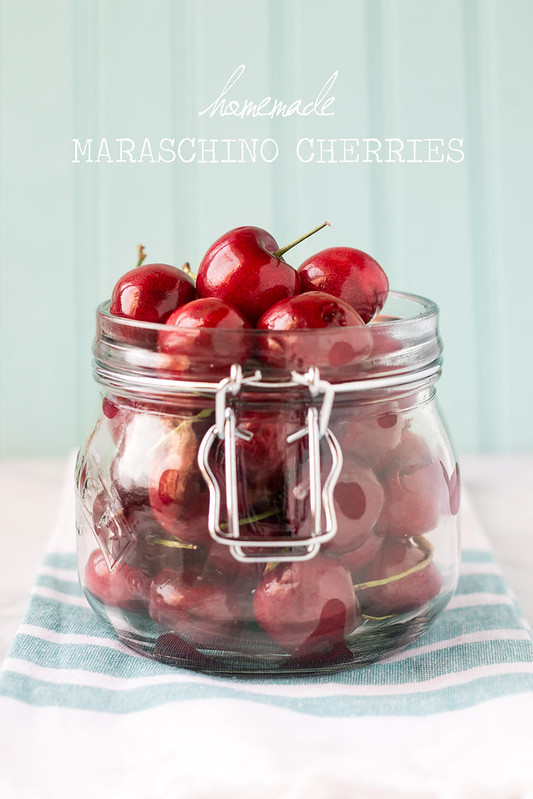 There are very few time when I am really, truly glad to live in Michigan, with its bitter winters and humid summers, but cherry season is one I am smitten with.

The trouble with fresh Michigan cherries is, I never, ever make anything with them. No sooner does a bag of cherries enter my house, and I’ve eaten every last one.

I have this nostalgic memory of standing on the front porch of my parent’s house spitting cherry pits over the railing. While other kids were having watermelon seed spitting competitions, my brother and I had our cherries.

Nowadays, I stand in my kitchen, spitting pits directly into the trash bin. Less glamorous, for sure, but no less wonderful. It’s pretty much what I always hoped being a grown-up would be like. 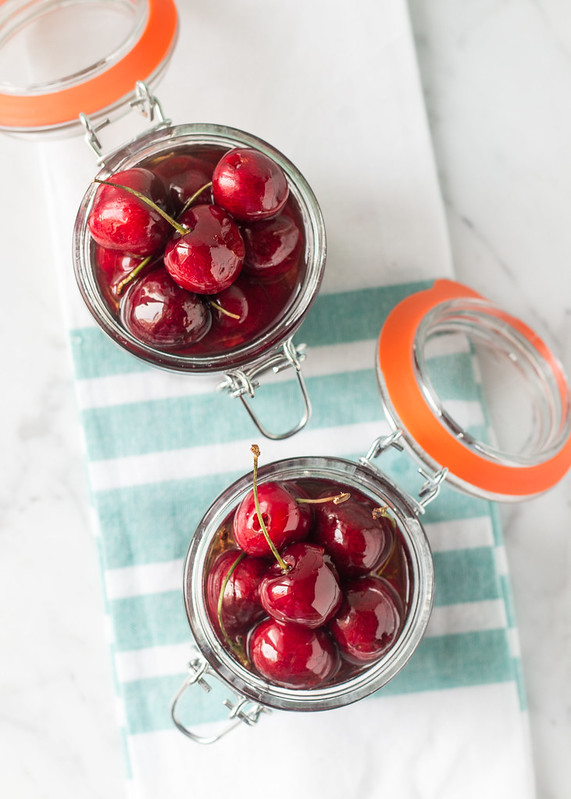 As some of you may remember, I shared this post last year, all about store-bought maraschino cherries and how they’re made. What I wanted to know then was how such an abomination of nature could ever become so popular. What I found out was, before prohibition, maraschino cherries were simply cherries preserved in maraschino liqueur (an alcohol made from the juice of marasca cherries and their crushed, almond flavored pits). After prohibition, the alcohol was replaced with a process of bleaching, dying, chemically preserving, and otherwise robbing the cherries of anything that might once have been considered good or natural.

How this stuck around after prohibition ended, I will never understand.

(Actually, cherry season is close to an end, now, but when I started these cherries in their boozy bath a few weeks ago, it was in full swing. Grab your cherries quick, before their gone!) 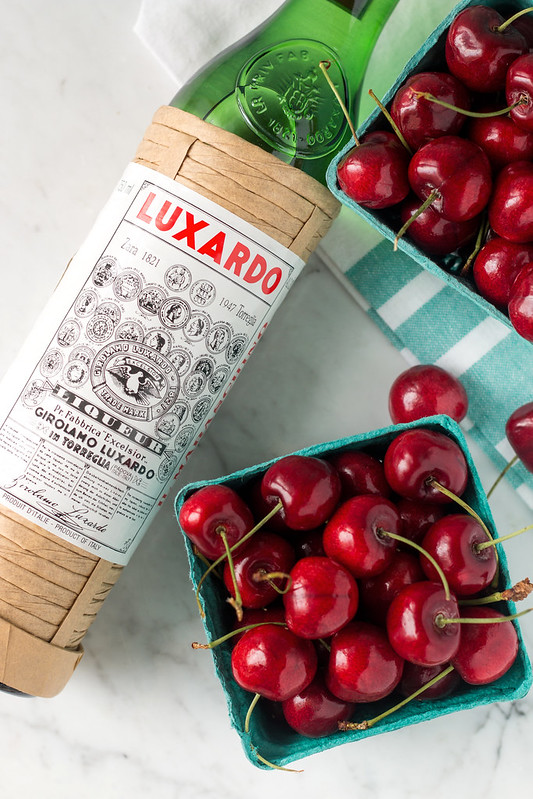 There are only two ingredients you need in order to get started. Let’s talk about them.

Originally, maraschino cherries were made from marasca cherries (a variety of cherry native to Croatia). Sour cherries are a popular alternative, but really, when it comes to making your own, you can use whatever variety you like. I went with sweet cherries, just because they’re a favorite of mine for snacking on. Mm, cherries…

Also, and perhaps more obviously, maraschino cherries are made with maraschino liqueur. However, this, too, is not set in stone. To be honest, you can make them with whatever kind of liqueur you like. Brandy would work nicely, as would bourbon, or rum, or grand marnier, or amaretto, or kirsch… the list goes on. In fact, I recommend using a liqueur you are familiar with and know you enjoy (if you’ve never had maraschino liqueur, you might be surprised by its potent cherry/almond flavor). At this point you should stick to calling them “cocktail cherries” instead of “marashino cherries”, but they’ll still be super delicious.

Now, that’s all you need, but the possibilities for variation don’t end there. Pick your cherries, pick your liqueur… then pick whether you want them sweet (a little sugar can be added to take the edge of the liqueur, or a lot of sugar can be added to make them sweet and syrupy), or flavored with other things (like whole spices — I added some clove, star anise, and cinnamon to one of my jars). Play around with different combinations to find what you like best.

One thing you are definitely going to need for this is a cherry pitter. Yes, I made a gif to show you how bad-ass a cherry pitter is. If you’ve ever tried to pit a cherry by hand, you’ll understand. A cherry pitter is your best friend here, A., because it means you won’t have pits in your cherries (duh), and B., because the liqueur will infuse the cherries much faster if they’re hollow.

This was my first time using a cherry pitter, and I was pretty geeked. Best kitchen appliance purchase I’ve made for a while.

Once the cherries are pitted, they’re placed in a (thoroughly cleaned) jar, and steaming hot liqueur is poured over them. Then they’re sealed, and left to sit in the fridge for at least two weeks before being dunked into your next cocktail. The longer they sit, the better they get. 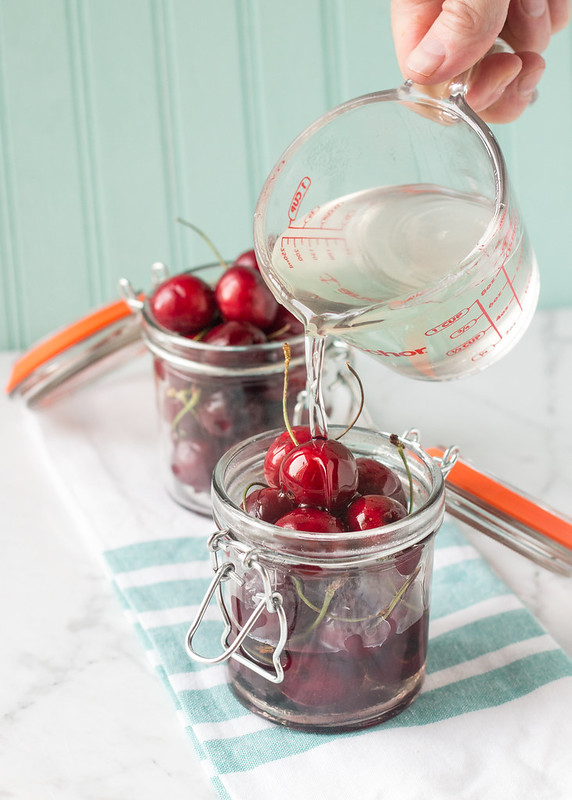 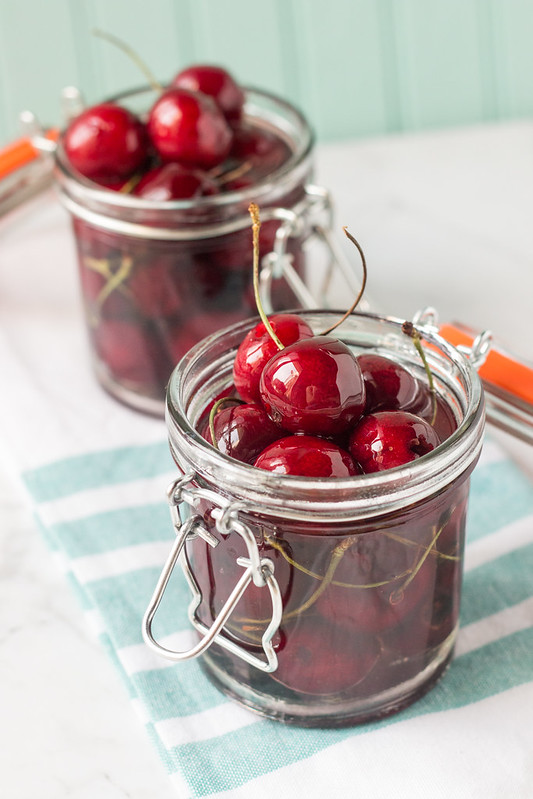 I’ve read a lot of recipes in preparation for my first batch of cherries, and some people will tell you the cherries will be ready to eat in 2-3 days. I tasted mine two days in, then five days, then seven days… and found that the harshness from the liqueur didn’t start to mellow until closer to two weeks. You can certainly taste yours before then and see what you think, but the longer you wait the more the flavors will marry, and the smoother the alcohol will get.

For my personal taste, I preferred the cherries made with sugar. It mellowed the alcohol, and also made them a little closer to the sweet, candied cherries I’ve become so accustomed to.

Let’s do a little comparison, shall we? 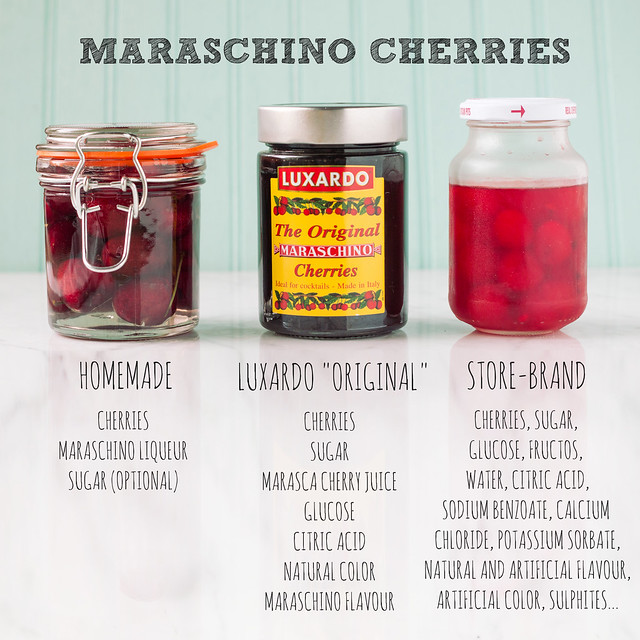 Luxardo is one of the only commercial brands left that makes maraschino cherries even close to the way they once where. They are still a far cry from the true, original, booze-drenched cherries they started as, packed instead in a thick syrup of marasca cherry juice and sugar, but they are also a whole lot better than the soulless red orbs floating in corn syrup and food coloring most of us grew up with.

If you’re looking for an addictively sweet, more-like-candy store-bought alternative, Luxardo fits the bill. Unfortunately, it also breaks the bank at around $15 a jar.

Homemade cherries, on the other hand, can be made to taste, and come in at less than half the cost (give or take, depending on the price of the cherries).

Now, if only I could get my hands on some marasca cherry juice, I’d be all set. In the Luxardo cherries, it adds a noticeable pop of cherry flavor. Instead, I decided to make a jar with a little tart cherry juice concentrate added, and found this provided that boost of flavor nicely, as well as turned the syrup a deep shade of red. It isn’t a necessary addition, by any means, but definitely one I will stick with in the future. 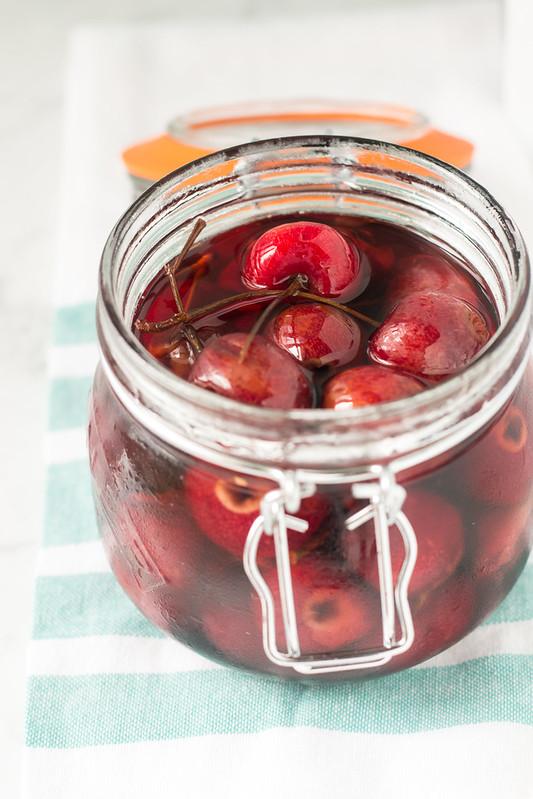 This is one of my jars after two weeks in the fridge. As you can see, there are already some cherries missing… not sure how that happened… *cough* i ate them *cough*.

Have you ever made cocktail cherries? Let me know in the comments below. (And, if you’ve never made them before, then you should really get on that. Did I mention cherry season is almost over?)

Print
Author: Willow at Will Cook For Friends
Ingredients
Optional:
Instructions
Notes
Use wherever maraschino cherries are called for (perfect for manhattan's and pina coladas). Or atop vanilla ice cream. Or eat them straight out of the jar. Or, you could hang out here and wait for my next blog post, in which I'll be making some boozy cherry limeade using these babies. Just sayin'.
3.2.2802
LIKE IT? SPREAD THE WORD:

Last week, I shared this photo on facebook: It was just a normal Friday afternoon, walking through Whole Foods, when...