Days like these ain’t too common ’round these parts. Before the summer swelter, before the humidity and heat-stroke. The perfect kind, where the sun is shining but the nights are cool, and the early June air fills the lungs like perfume. These are the kind of days you wish would last forever, like time were moving slow as molasses, and every moment were just as sweet.

There’s something about the word molasses. Just the mention of it, and all my thoughts come spilling out in a Southern drawl, sweet and slow as, well… you guessed it.

Besides the South, molasses makes me think of the holidays, and gingerbread, and dark, chewy molasses cookies. It makes me think of English puddings, and Boston baked beans, and the distilling of rum. And yet, with so many culinary uses, I know surprisingly little about this syrup, which brings us to today’s subject. If you’ve ever asked yourself what the difference is between “sulphured” and “unsulphured” molasses, or wondered what treacle or sorghum are, well… this is the article for you!

All About Molasses, Treacle, and Sorghum
Molasses — is a syrup made from the refining of cane sugar. The word “molasses” is derived from the Latin word Mel, meaning honey. As I discussed in part one of this series, Cane Sugar and How It’s Made, the juice of the sugar cane is boiled down until sugar crystals begin to form, then it gets spun in a centrifuge to separate the sugar from the molasses. Because molasses is the mineral-rich bi-product of refined sugar, it is often said to have many health benefits. There are several different types of molasses, including “sulphured” and “unsulphured”, as well as a variety different grades ranging from relatively light, to the very dark and bitter blackstrap.

Sulphured vs. Unsulphured — Sulphured molasses is the bi-product of sugar that has been processed with sulfur dioxide. Sulfur dioxide is most commonly used when the sugar cane is very young or green (to help ripen it), or as a means of lightening the color of molasses, and to kill off some of the naturally occurring bacteria in order to give it a longer shelf life. Sulfur is commonly used as a preservative in foods like dried fruit, to prevent oxidation. The FDA considers sulfur dioxide to be safe, though it is required that foods processed with it are labeled as such, as some people (especially those with asthma) can have an allergic reaction to it.
Unsulphured molasses is made from sugar that has not been processed with sulfur dioxide. Because it is untreated, unsulphured molasses is often considered healthier than sulphured. It also means that the sugar cane was allowed to ripen fully before harvesting, which may affect the nutritional and flavor profile of the molasses. Unsulphured molasses tends to have a less bitter taste than its sulfur treated counterpart.

Light and Dark Molasses — cane sugar goes through several phases of refining. In the first phase, the cane juice gets boiled until the sugar crystals begin to separate from the liquid, then spun through a centrifuge which separates the sugar from the molasses. This first processing is called mild, or first molasses. It is the sweetest and lightest of all the grades. The syrup then gets re-boiled and spun again to remove more of the sugar. This results in a darker syrup called second molasses. On the third boiling, many of the remaining sugars begin to caramelize, darkening the syrup even further. This final extraction of molasses is called blackstrap. This is the darkest grade available, with a somewhat bitter flavor. Blackstrap molasses is often used for its nutritional benefit, containing nearly 20% of our daily need for calcium, magnesium, potassium, and iron per tablespoon, among others (though this may vary depending on brand).

Molasses in Cooking — molasses has many uses in the culinary world, but is most often used in baking. Because molasses is naturally acidic, it can be used alongside baking soda to help baked goods rise. Molasses also contains a type of sugar called invert sugar (the result of boiling sucrose with an acid) which is particularly hygroscopic (meaning it holds onto moisture well). This can help baked goods stay soft and fresh longer. Molasses is also used in the making of many beers and liquors, and in recipes like stews, chili’s, and baked beans. Lighter, sweeter molasses can be used as syrup on pancakes, a spread for biscuits or toast, or used in other applications as a substitute for maple syrup or honey.

Molasses can also be made in the refining of beet sugar, though it is considered unpalatable for human consumption and therefore used mostly in animal feed. In some parts of the world, different types of molasses are made from carob, dates, grapes, pomegranates, or other fruits, and can go by a variety of different names.

_______________________
Treacle — is basically the British equivalent of molasses. It comes in several grades, ranging from light “golden syrup”, to dark or “black” treacle. The word “treacle” is defined as any syrup made in the refining of cane sugar. This includes molasses, though some will debate whether the two are the same or not.
Treacle comes in two main forms: Light Treacle (also called Golden Syrup), and Black Treacle. Light treacle is the equivalent of a light molasses, made during the first extraction of the refining process. It has a light golden color, a sweet, almost buttery flavor, and is commonly used in baked goods such as treacle tart or puddings. It can also be eaten as is, used in place of honey or maple syrup, or spooned over ice cream.
Black treacle is the equivalent of dark molasses (note that it is lighter in flavor and less bitter than most blackstrap molasses). It is most often used in recipes like breads, cakes, cookies, and toffee, or in savory dishes such as glazes, sauces, or stews.
_______________________

Sorghum — (also called sweet sorghum, and sorghum syrup), are made from a type of grass. The grasses grow in tall stalks, similar to corn, which are harvested and juiced. The syrup is made by boiling the juices in large pans until enough moisture has evaporated to leave behind a thick, dark syrup. This is sometimes referred to as “sorghum molasses”, but unlike molasses made from sugar cane nothing gets extracted besides excess moisture.

In many ways, sorghum syrup is very similar to molasses. It has a thick consistency, dark color, and sweet caramelized flavor (often times sweeter than regular molasses). Like molasses, it is also high in  many vitamins and minerals, including iron, calcium, phosphorus, and b vitamins. Sorghum syrup can be used as a substitute for molasses in many recipes, but is most frequently eaten over hot oatmeal, pancakes, or grits. In the south, sorghum syrup on biscuits is a common tradition.

Besides its sweet syrup, sorghum is also used for feed and silage for animals, the production of some alcoholic beverages, and its grains are sometimes milled into a flour that can be used in gluten-free baking.
This is part two of my series on different types of sweeteners and how they’re made and used. You can check out part one here: Sweet Talk, Part 1 – Cane Sugar and How It’s Made
(All photos are copyright by me. I was not paid or compensated in any way by Grandma’s molasses, nor do I have any affiliation to them.)
LIKE IT? SPREAD THE WORD: 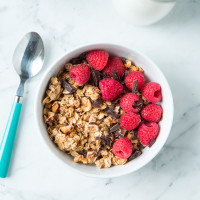 Sweet & Spicy Chipotle Barbecue Sauce – Just Like Store-Bought, Only Not At All
Barbecue Bacon Cheeseburger – Man-Food To The Max

Sweet & Spicy Chipotle Barbecue Sauce – Just Like Store-Bought, Only Not At All

Barbecue sauce is a bit of a touchy subject. Almost like religion, or politics, depending on where you are everyone...